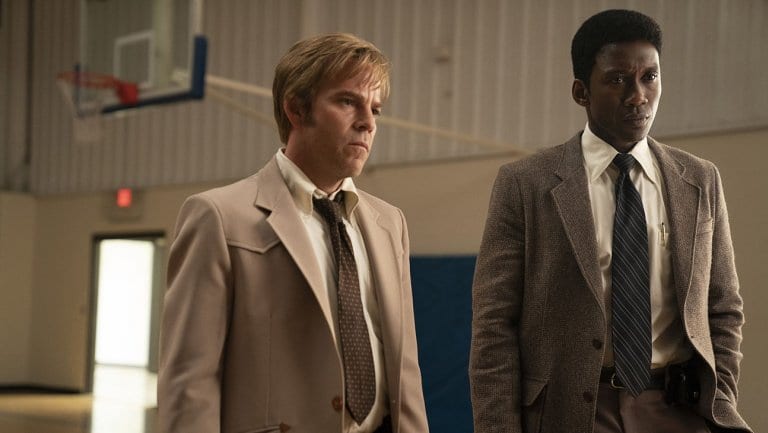 True Detective Season 3, Episode 1 is titled as “The Great War and Modern Memory,” and Episode 2 is titled as “Kiss Tomorrow Goodbye.” Mahershala Ali is amazing in the role of Wayne Hays and his life in flashbacks. Wayne Hays is shown in three different timelines, the most important of which is the case of missing children of his career. At present, Mahershala (Wayne) has grown old; he’s a retired detective suffering from Alzheimer’s disease. The plot kicks off when Waynes is asked to recall the events during a homicide case in the year 1980.

The flashback then leads to True Detective buddy-(cop themed serial) where Wayne and his partner Roland West (Stephen Dorff) are shown off working cases. The most important of all cases is a sensational small-town murder of a dead boy, later his sister also goes missing in the year 1990. But later it appears she’s alive. Nic Pizzolatto is head if this anthology based Season.

The title of the premiere episode is “The Great War and Modern Memory, ” and so far so good! Season 2 of True Detective wasn’t all that great; Season 1 was fantastic though. But Season 3 has bounced back with a fantastic, nonlinear storyline. Wayne also had ghosts from his past that needs to deal with, and he’s trying to put his life together too.

Season 3 is all about 12 and 10-year-old siblings Will and Julie Purcell, who while riding their bikes in the neighborhood, West Fingers, Arkansas disappear. The anthology series is derived from the true case titled as “West Memphis Three,” that happened in 1993. Three teenagers named Jessie Misskelley, 17; Jason Baldwin, 16; and Damien Echols, 18 – were charged with homicide of three eight-year-old boys.

As the episode starts, Freddy Burns (Rhys Wakefield) and Ryan Peters (Brandon Flynn) are seen in a police interrogation center. Mahershala Ali is the soul of True Detective. True Detective Season 3 released on January 13′ 2019 with first two episodes coming out on the same day. The next Episode titled as “The Big Never” is out on January 20′ 2019.