The stage is all set for Super Bowl LIII where the conference championship games, the Patriots and Rams will be involved in a face-off. They will meet at Mercedes Benz Stadium in Atlanta in less than two weeks as you read this. Super Bowl 2019 will mark the third in row Super Bowl appearance for New England. As goes for the date, Super Bowl LIII will take place on Sunday, February 3, 2019. The game will kick-off at 6:30 p.m. ET. CBS will provide the coverage of the same. Below are the key details: 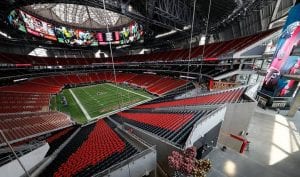 The National-Anthem will be sung by Atlanta-born R&B legend Gladys Knight. He is officially confirmed to sing the national anthem before the game begins. As goes for the half-time performers, Maroon 5, the pop band is all set to take the headline at the Pepsi Super Bowl LIII halftime show in Atlanta. Maroon 5, the hit band has sold more than 53 million albums worldwide and is known for hits such as “She Will Be Loved” and “Moves Like Jagger” and the most recent one “Girls Like You.” Rappers Travis Scott and Big Boi will also join Maroon 5 in the performance.