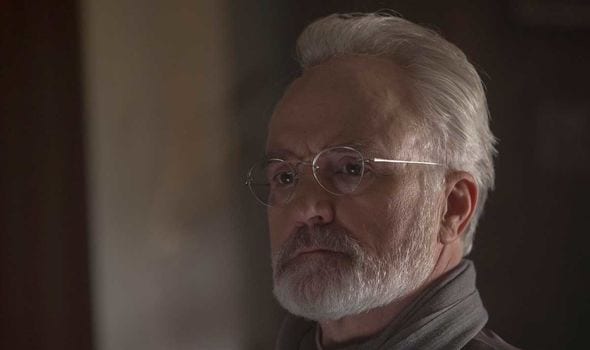 The Handmaid’s Tale so far has been trying to establish various things through each episode. Episode 10 of Season 3 premieres next Wednesday on Hulu, i.e., July 24. The dystopian series that is The Handmaid’s Tale is back this time with Commander Lawrence at the center stage.

As you may have seen in the trailer above, episode 3×10 opens to a welcoming ceremony for Commander Winslow (Christopher Meloni) led by Aunt Lydia (Ann Dowd). And when is Lydia without her handmaids? All her girls are lined up at this ceremony.

We are then shown Fred Waterford (Joseph Fiennes) and June (Elizabeth Moss). As Winslow nears Fred, the latter says to him: “George, you remember Joseph.” June is being asked how living with Commander Lawrence has been.

More than anything, fans want to know Lawrence’s backstory, his character gets complicated by the day. He is the central architect of Gilead, and yet he helps Emily escape with June’s baby.

But why would Fred, Serena, and Winslow talk about Lawrence’s family life all of a sudden? Could it be that Lawrence’s secret is no longer one or are the Waterfords punishing June for slicing Serena’s hand?

Throughout Season 3, June has been assigned to Waterfords, and it has been made amply clear that the Commander has no desire whatsoever to participate in the ceremony of forcible sex with the Handmaid. Will Lawrence be coaxed into one? In the promo, we are shown some kind of a group ceremony between Lawrence, Serena, Fred, Winslow, his wife Eleanor (Julie Dretzin) and June.

There’s Lawrence’s voice over of the notorious pre-ceremony Bible verse: “And when Rachel saw that she bare Jacob no children, Rachel envied her sister, and said unto Jacob, Give me children, or else I die.” June reminds Lawrence that he helped create this world as Mrs. Lawrence breaks down in tears, by the end. And cut! Could this be it for Commander Lawrence?