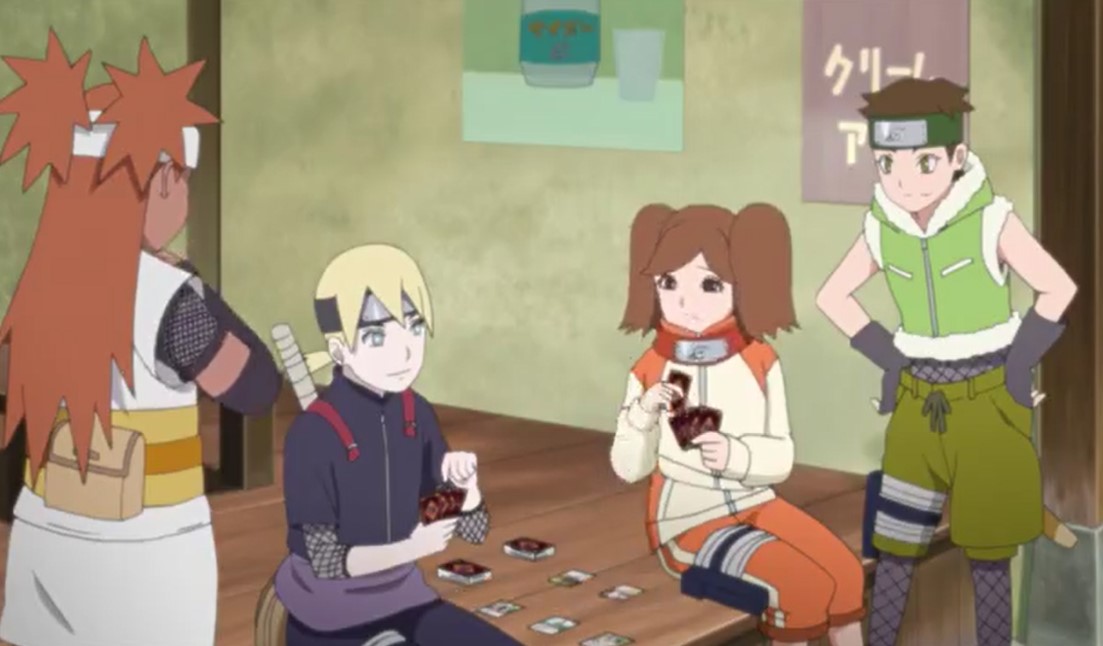 From the latest updates of this anime, Mitsuki, Sarada, and Boruto teams up together and defeat Deepa in a single blow. Deepa’s body armor is destroyed and he is worried about his Divine Tree fruit while lying on his back on the ground. Orochi has also managed to defeat Victor and Konohamuru is glad that Mitsuki has recovered. Orochi said that he was saved by an organ donor and tells Konohamaru that he is living the rest for him. Let’s see what will happen below.

The next day in the morning Chocho, Ino, Namida, and Wasabi are playing chards game at the candy store. Namida uses the ultimate combo and defeats Ino while Boruto is with Miyuki, Sarada, and Shikadai. Boruto is pretending as if his hand is fine but it is not since it has suffered injuries when he was battling Deepa. Shikadai said that the doctors have said it is going to take three weeks until it heals completely. Inoji is glad that Boruto has perfected his new Rasengan.

Boruto reveals that he is forbidden to use it and if he does his arm could get destroyed. He then adds that if Mitsuki wasn’t there with him it would have been disastrous. Denki shos up wondering about the direction of the wind and Shikadai asks him why is he alone. Denki couldn’t hear him since he was thinking deeply passing by. Meanwhile, Naruto has summoned Mogino and Konohamaru to his office. Shikamaru reveals that they have also asked Lord Fifth and Lord Sixth to join them.

Naruto said that he has read the report Konohamaru and Mogino submitted. He wants the two to explains the matter in front of the previous Hokage. Konohamuru reveals that the ones they fought were named Victor and Deepa. They are unknown figures not listed in the Bingo Books of any nation and they were unlike anyone they have battled before. Their objective was the fruit of the Divine Tree that was left after the Fourth Great Ninja War and was retrieved and cultivated.

They explained all the details and how the battle ended. Sai and his ANBU reveals the additional investigation they did in the Land of Valley. Naruto has promised others to wait for a day for his decision about whether to blockade the gate or not. Later a new villain has rise talking about the Divine fruit with his allies.