I picked up Tonari no Seki-Kun for one reason and one reason only. I could finish it in one sitting. I wouldn’t recommend it, but it is possible. But I did not expect that I would wish that it would never end by the time I finished xD. I just went ahead and watched the OVA and special episodes too. No regrets whatsoever; thus, I’m back with an underrated anime that I enjoyed.

Rumi Yokoi is a girl who wants only one thing: to be able to focus in class. But with her neighboring classmate, Toshinari Seki, around, it might just not be possible. Every day, Seki is busy constructing complicated setups with a variety of items. He never seems to run out of ideas, from elaborate domino courses to a treacherous war with shogi pieces. Yokoi always gets in trouble due to Seki, but at least class time will never be dull!

I had just finished up the gargantuan Monster (which was a complete slog that I did not enjoy at all) and needed something small and refreshing. I first thought of watching Saiki Kusuo no Ψ-nan, but the number of episodes was a bit too much, even for a short anime. So I settled on Seki-Kun. Short anime is not to be scoffed at or ignored anymore, and one of the reasons is right here.

As mentioned before, Tonari no Seki-Kun is a short anime. That is, its episodes are 7-8 minutes long. And the show itself is only 21 episodes. So do not expect anything complex or intriguing. Instead, the show is all about Seki-Kun and how he passes the time during his boring classes, and the relatively innocent Yokoi-san who gets caught up in it.

Creativity is the name of the game here. Some of the stuff Seki-Kun does may blow one’s mind, while some others are plain silly. But all of them are funny and enjoyable. Yokoi-san’s curiosity is what drives every episode (and lands her in trouble). Though most of the time, it seems like Yokoi is having difficulty dealing with Seki, there are instances she embraces her neighbor’s antics. Those are some of the best episodes. My favorites were the chess ones, entertaining. 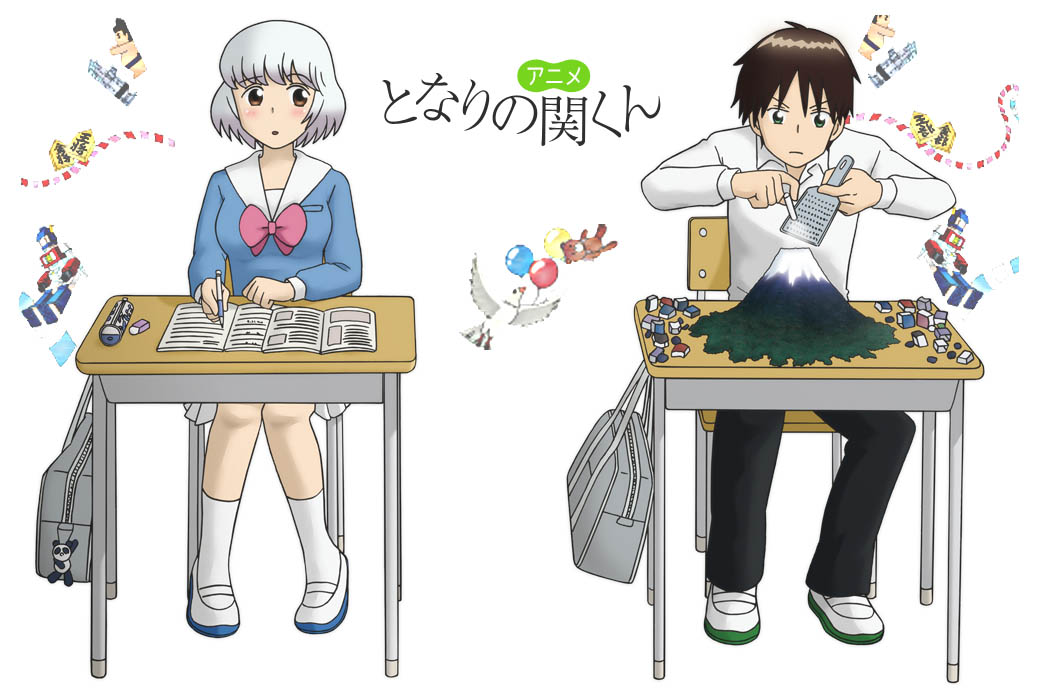 Both Seki and Yokoi are straightforward characters, reflecting what actual students of their age are. Seki-Kun is a shy boy that prefers to be left alone with his activities. He does not have any dialogues either, communicating with gestures and facial expressions. Seki is presented as a somewhat strange person (due to his antics) but is still very likable.

Yokoi is the unfortunate girl sitting Seki, and is even somewhat similar to him, considering her curiosity. She is the one who always gets in trouble due to Seki, and with every passing episode, she becomes a bit better and resists him. She even comes close to stopping Seki from wasting time, but never really manages to get there. While Seki draws the viewers’ attention through his antics, Yokoi forms the crux of the humor, and the pair is incredibly fun to watch in action.

The animation is what you would expect from a short series like this. Simplistic. And yet it adds to the atmosphere of the show. There is not much to say about it other than it is very satisfactory. The character designs, the classroom backdrop, everything fits perfectly and never deters the viewer from what is happening. This is great because you are not watching Tonari no Seki-Kun for its brilliant animation, but rather for the clever humor it brings to the table.