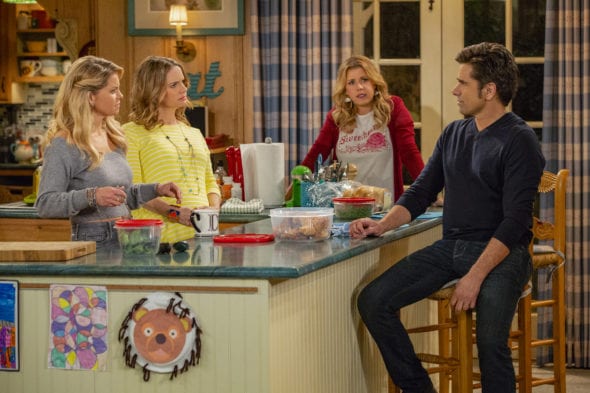 The cast of Fuller House is back on the sets, working on another Season. That’s right, Fuller House is all set to be back for Season 5 on Netflix. Castmates won’t stop from posting pictures on Instagram of their final stint on Fuller House. But there’s a slight change, Lori Loughlin (Aunt Becky) will not be a part of Fuller House. Season 5 which is the upcoming and the final Season of the series is sans Lori Loughlin. She was indicted in the college admissions fraud scheme along with her fashion designer husband, Mossimo Giannulli. Both Loughlin and Giannulli pleaded not guilty to money laundering and mail fraud charges in the ongoing investigation of college admissions scandal.

Jodie Sweetin, who plays Stephanie Tanner announced that she and rest of her classmates are back for Season 5 of Fuller House. Another cast mate, Bob Saget who plays Danny Tanner made his presence counted by sharing a pic with fellow cast mates Candace Cameron Bure (D.J. Tanner-Fuller) and Andrea Barber (Kimmy Gibbler).

Fuller House Season 5 recently did its table read. The show is currently in production mode. Neither Netflix or show reps have spoken to us about Loughlin’s absence and how it will be handled in the show. Season 5 of Fuller House doesn’t have set update as yet. Given that it just entered production mode, Season 5 release will take some time.

Despite Lori’s chargers, former Cast mated from Fuller House have provided full support to the actress, some even going public with their statements. Fuller House Season 5 sure is going to miss Lori but it is what it is. More as we have it.