K-on is a very popular show in the music slice of life genre, k-on was adapted by a well-known studio called Kyoto animations (KyoAni) in 2009, k-on is a very long anime considering it a slice of life show ( 2 seasons and 1 movie), so could you invest your time on K-on?, Let’s find out!

As mentioned k-on has 2 seasons, the first season contains 13 episodes and the second season contains 26 episodes. Yui Hirasawa has just ended middle school and now started her journey as a high school student. A high school year always means much to come, and one of those things is joining a club.

K-on starts at quite a slow pace as any slice of life anime should. But the fact that makes a slice of life relevant is consistency, consistency in k-on is absolutely amazing as it stays slow-paced and con still entertains us more than any other mediocre anime. 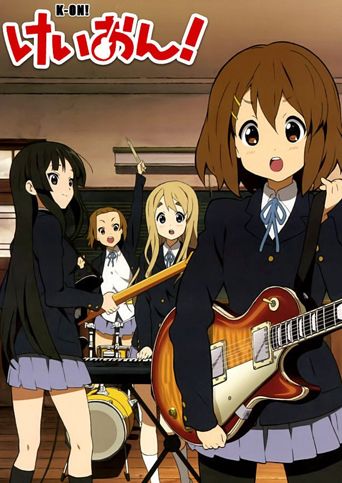 High school is getting over soon, graduation day is coming, and the Light Music club decided to throw a graduation trip to London. The fun of high school won’t last forever, as Yui Hirasawa, Mio Akiyama, Tsumugi Kotobuki, and Ritsu Tainaka are going to be graduating, they plan to give Azusa Nakano a certain gift for being with their club, the girls from the light music club are going to visit famous landmarks.

K-on movie is like OVA that’s turned into a movie, the movie, as usual, has high production quality, as Kyoto animation does.

K-on is for a slice of life lover, a slow burner of high school moe girls playing music is just the main thing for the series, the characters are the main priority of k-on rather than the plot as every slice of life.