Unforgotten is a crime drama TV series that aired on ITV on 8 October 2015. It has been created and written by Chris Lang. Andy Wilson directed this TV Show. It was a well-received TV show that was loved by many and it had a rating of 8.1/10 on IMDb. The story of this TV show is very good and each season there was a different goal of our protagonists. The first season focuses on the murder of James ‘Jimmy’ Sullivan, a seventeen-year-old who disappeared in 1976. His remains are discovered during the demolition of a house in North London.

The second season follows the murder of David Walker, a Conservative Party consultant who went missing in 1990. His saponified remains are found in a suitcase buried in the River Lea. And the third one investigates the murder of schoolgirl Hayley Reid, who disappeared from a seaside resort town on New Year’s Eve 1999. Her skeleton is discovered by workmen repairing the central reservation of the M1 motorway in London. 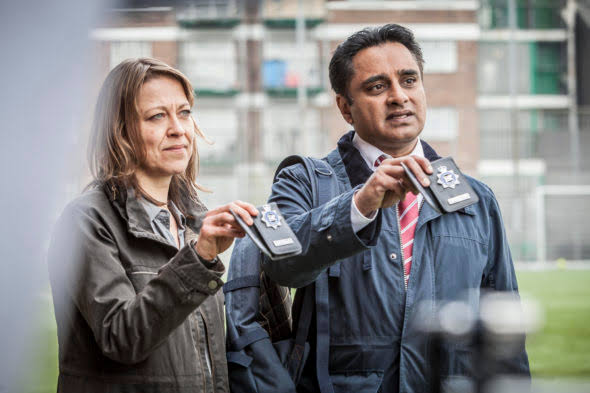 The cast consist of Nicola Walker as DCI Cassandra ‘Cassie’ Stuart, Sanjeev Bhaskar as DI, Sunil ‘Sunny’ Khan, Jordan Long as DS Murray Boulting, Lewis Reeves as DC Jake Collier, Pippa Nixon as DC Karen Willetts, Carolina Main as DC Fran Lingley, Peter Egan as Martin Hughes, DCI Stuart’s father and Jassa Ahluwalia as Adam Stuart, DCI Stuart’s son. But the question right now on the fans’ mind is whether there be a fourth season of the show. The fans of series rejoice as the show was already renewed back in 2018 but there haven’t been any updates about it. Until now.

On 9th November, Sanjeev posted a picture of himself with co-star Nicola on Twitter, the caption reads: “Sunny and Cassie sitting in a tree… Catching up with a friend and discussing what might end up in #sunnysbackpack #unforgotten series 4 filming soon! #nicolawalker @UnforgottenTV @mainstreetpics.” It mostly is a hint to the fans who are in doubt about season four for not been a thing. Mostly likely we will see the fourth season of the show in 2020.

El Dragon: Return Of The Warrior Might Be Coming Back For A Season 2