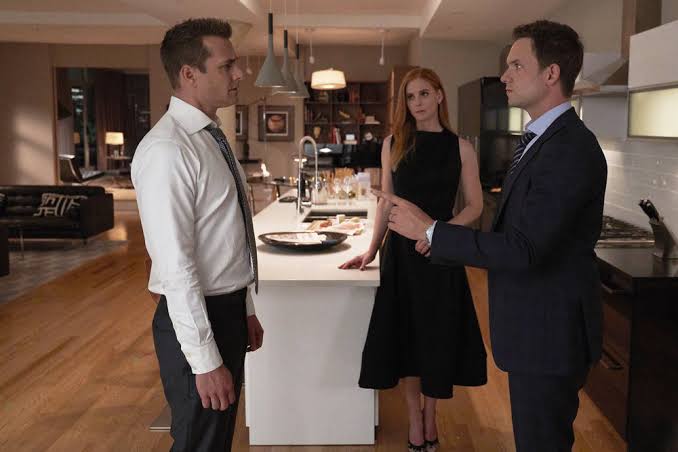 Suits fans have been waiting for such a mess since a long time, and now they are getting all of it. Whether it is Donna and Harvey’s relationship, or Faye having an eye on their relationship which is affecting the firm. On the other hand, Louis and Harvey are also having a bad time together because Faye is not behaving well with them. At least they now know that it is because of Faye that they can’t even talk to each other like they used to, and now they decided to face her together. So, we are here with all the details of Suits season 9 episode 5, although we would still discuss a bit about the previous episode first.

Faye asked Katarina to make a code of conduct in the firm, to take the things under control. Due to that, Louis wanted her to get Gretchen back using the same. She denied because she did not want to ruin it. Nonetheless, Harvey and Louis’ plan worked well as they decided to resign if the new manipulated code of conduct is not signed by Faye. So, Louis got Gretchen back. Moreover, Harvey messed up in front of Donna’s father by talking about a deal. But he managed to make things better soon!

The show is now four episodes deep into the ninth season, and the fifth episode is supposed to air this week. The fifth episode of Suits season 9 is scheduled to release on 14 August 2019. The show is broadcasted on the USA channel at 9 PM on Wednesdays. The upcoming episode is titled ‘If The Shoe Fits.’

The show can also be streamed online, and USA app would be the easiest and cost-effective source to stream the show. Moreover, several options like Hulu, Roku, PlayStation Vue can also help you stream USA channel to watch Suits at the discussed time.

The upcoming episode will feature more issues, as we will see Mike having a tussle with Harvey. Due to their behavior, Samantha will be stuck between whom to choose. Hence, it would be interesting to see where the story takes us!