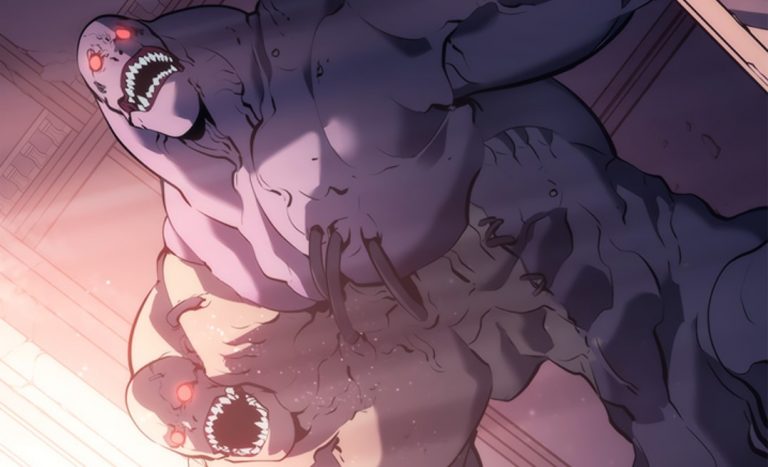 The hunters are fed up with monsters who are killing humans, and the E-rank hunters wanted to clash with three monsters coming towards her way. Her colleague holds her hand and told her that she doesn’t stand a chance. The monsters sense the energy of humans and try to attack the Hunter and her friend. Before the monster kills them the powerful attacks come out of nowhere and stop the monster from killing humans.

An E-rank Hunter said ”Oppa he’s here.”Suddenly Oppa appears and cuts one of the monsters into pieces. Meanwhile, a group of Hunters enters a dungeon and one of then saw an Ogre. A twin-headed Ogre attacks them and Yoon-Tae blocks the attack that damages the ground. The Hunters team-ups to take the Ogre down, Noonas, Hyung attacks the monster from different angles. They manage to do some damages by tearing the monster’s body and burn it down.

In this week’s post, we are going to talk about the Solo Leveling Season 2 Chapter 119 release date and a recap of the last chapter. The Hunters are about to enter the dungeon. They think that it is the hardest A-Rank dungeon and they are not afraid of anything since Jin-Woo is with them. Let’s see what will happen below.

Solo Leveling Season 2 Chapter 119 will be released on Thursday, 17 September 2020. Every Thursday new chapter of this Manga will be released. The spoilers for the next chapter are not yet available you can take a look at the following recap and ways to read this Manga below.

They both decided to regroup. Ji-Woo is ready while Park Jong-Soo thinks that the raid won’t be easy for them today. Park Jong-Soo asks Jin-Woo if he knows what twin-headed Ogres called. Jin-Woo replied that they are known as Gravekeepers. Park Jong-Soo said that the only problem is when the monster appears at the entrance but it doesn’t matter if it is the boss. He explains that the dungeon consists of the undead and Jung-Yoong asks Hyung if the must keep ongoing.

Suddenly the group of undead shows up. Sung Jing and Son Ki notice that they are backing off and it is surprising them. Jin-Woo thought that it was going to be the hardest A-Rank dungeon. He has high expectations but everything they are facing they are just taking it down in a single blow. Jin-Woo felt something strange and he announces that he has to go and take care of something urgent. Others Hunters said that it will be dangerous for them without Jin-Woo.

Jin-Won said that he will summon someone who will protect them since he is leaving. He summons one of his powerful summon and told it to protect humans. It asked him what about non-human and replied it can do whatever it likes with them. Jin-Woo left and reaches where he is needed everyone is happy to see him. He unleashed a powerful attack and said ”to my sister” attacking at full speed. To be continued we will see what Jin-Woo was trying to attack next time.

You will be able to read this  Manga’s latest chapters on Kakao Page Magazine, so you can support the creator by buying the magazine. We highly advise you to support the official release as it supports the creators. Note that there are no official ways to read this Mang.