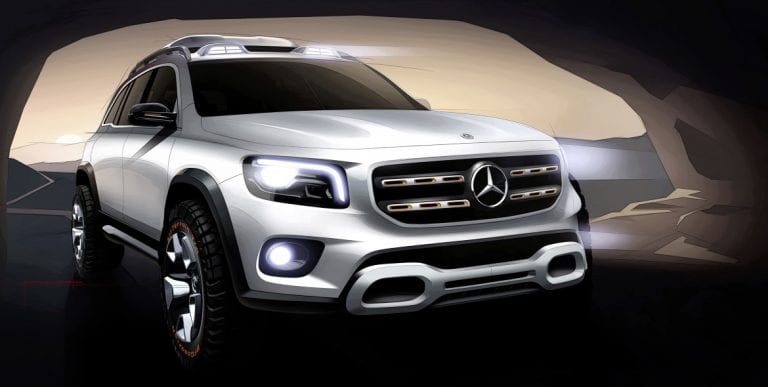 The company, Mercedes are making yet another sizeable SUV, and this new compact crossover is on its way to us. The company has done this because it is not that line up isn’t comprehensive enough, but they have found a solution for that which is the GLB compact SUV. The exterior of this SUV is inspired by the G class which is on the top of SUV game, but GLB is smaller and has more family-friendly offering to it.

The interior and tech in haven’t been revealed to us yet, but some concept photos show us that its Interior will be based on A-Class hatchback. It hasn’t been confirmed whether it will be a terrible cross credential, but with its all-wheel-drive system and “Off Road” driving mode, it should make it an off-road SUV. This also means that the short overhangs will go up so that a steep place won’t tear off the bumpers.

GLB looks like it is about to end its production, it won’t be a surprise if it will have a 221bhp 2-liter, four-cylinder petrol engine especially when Mercedes has already offered the same engine on the A-Class.

If the company follows it, then it will be available with some of the A-Class’ engines which include a 2-liter four-cylinder diesel on top of the previously-mentioned petrol engine with higher and lower power outputs. The gearbox will likely be an eight-speed automatic, and all models will only be available with all-wheel drive. As for a hybrid variant, it hasn’t confirmed by the company, but some reports suggest that it will eventually have a hybrid variant.

Mercedes GLB will have a rival like Audi Q3, Porsche Macan, Jaguar E-Pace, Range Rover Evoque and Land Rover Discovery Sport. Even though it is in the concept stages but it will finish production this year. At the end of this year, the pre-orders will be open, and the Deliveries will likely begin before spring in 2020. The price of this car will start from m £31,000, and it will end around £41,000.