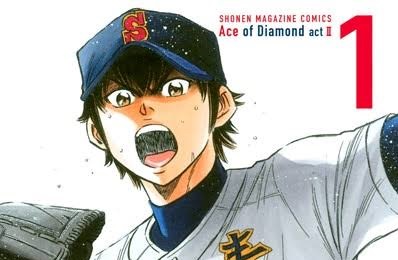 In this article, we will be talking about Diamond no Ace Act 2 Chapter 195 where to read the latest chapters and Spoilers. Chapter 194 was just released yesterday which saw Seidou’s 4th batter Kazuya taking the batter’s box as the tournament continues. On the other hand, Norikane’s coach sent in Miyura to replace Urabe. The pitching continued as Seido continued their lead to 8 points clear. To which Norikane replied by 2 outs as Sawamura’s pitching was unstoppable. When Norikane’s time to bat came they had a long lead to chase and started off with long hits. Seido’s team was then planning a way to stop them as they do not want to concede any runs.

Diamond no Ace Act II picks up a year after the end of the fall tournament, where Seisou High School baseball team fights it out with its old and new rivals as they start their new tournament run at Koishien. Their new ambition as a team is to make it to the nationals and convince coach Kataoka not to resign from Baseball.

Norikane prepares for their counter-attack in order to clear the 8 runs lead from Seido’s team. Although they started off with long hits, Seido’s team is not afraid of them as their strategy is to prevent their line up from connecting. In the upcoming chapter, we will get to see a battle of strategies. It seems like Norikane’s team is set on starting off with long shots. However, this wouldn’t be enough to chase the 8 runs lead. Let us wait to see if Norikane will formulate a new strategy for their counter-attack in the upcoming chapter

Diamond no Ace Act II Manga is released once in approximately 8 days. As Chapter 194 was released yesterday. Then this means it will be a little while before chapter 195 is released. Probably on the 20th of December 2019 if there are no issues that might bring about delays.

Where To Read Diamond no Ace Act II Chapter 195?

Diamond no Ace Act II Manga is widely available on the internet on various Manga websites. The mangs Diamond no Ace Act II is officially published by Kodansha, so make sure you support the manga by reading it from official platforms. we advise you to read the digital scans of the Manga instead of raw scans that are usually available 2-3 days before the digital scans are published.