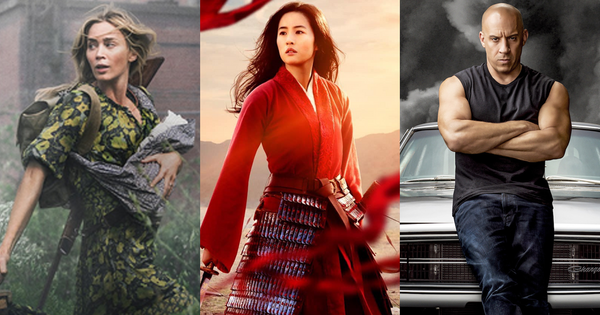 Due to the Coronavirus Disease 2019, aka COVID-19, the many upcoming events have been postponed in the wake of this pandemic virus. Public events and social gatherings have now been restricted. Due to the restriction, film studios have to reschedule some of their theatrical releases. In this post, we will update you about the movies which have been postponed or have changed into Video on Demand (V.O.D.).

The movie ” A Dog called Money” was made by the creator itself PJ Harvey and an award-winning photographer Seamus Murphy. Murphy and Harvey went places like Kosovo, Washington DC, and Afganistan. Murphy collected pictures Harvey turned them into words and then later songs and then an album.

The second sequel of an American Horror film, A Quiet Place, was released in 2018, written and directed by John Krasinski. Emily Blunt, Millicent Simmonds, and Noah Jupe will be the main cast with Cillian Murphy and Djimon Hounsou. The film was supposed to premiere in New York City on March 8, 2020.

Antebellum is another American horror drama film that was supposed to release on April 24, 2020. The movie is written and directed by Gerrard Bush and Christopher Renz and produced by Sean McKittrick, who produced Get Out, Us, and Donnie Darko. The movie is about a successful author Veronica Henley who finds herself in a nightmarish reality who looks for a way to get out of the horrors at hand.

A science-fiction horror film Antler directed by Scott Cooper from a screenplay by C. Henry Chaisson, Nick Antosca, and Cooper. The movie is based on a short story that was published by Guernica called “The Quiet Boy.” The movie is supposed to release on April 17, 2020, but postponed due to the covid-19 pandemic.

The story follows a story Julia Meadows who is a teacher in a small town in Oregon, and her brother, Paul, who is the local sheriff and one of Julia’s students who is keeping a supernatural creature in his house. The creature is causing several disasters, which is why something had to be done to resolve the issue.

One of Marvel’s awaited film Black Widow which was supposed to be released on May 1, 2020, is delayed due to the covid-19 pandemic. The film Black Widow is directed by Cate Shortland and written by Eric Pearson from a story by Jac Schaeffer and Ned Benson.

Natasha Romanoff, who is known as the Black Widow of S.H.I.E.L.D. who was forced to confront dangerous conspiracy which has the ties to her past. Being pursued by a force that will stop at nothing to bring her down. Natasha Romanoff must deal with her history as a spy and the broken relationship left in her wake before she became an Avenger.

A 2019 Britsh crime drama Blue Story is a British crime drama film written, directed, and narrated by Rapman Andrew Onwubolu through a rap. The film is Rapman’s feature directorial debut based on his 2014 YouTube series with the same name.

The film was released in the United Kingdom on November 22, 2019, but Vue Cinemas and Showcase Cinemas in the U.K. decided to stop screening due to the outbreak of violence during the film being shown in the cinema in Birmingham. Paramount decided to resume its screenings on March 20, 2020.

The film Bull is directed by Annie Silverstein and written with both Annie and Johnny McAllister. The story tells about a nearly abandoned subdivision west of Houston. Where a wayward teen into her equally willful and unforgiving neighbor, and aging bullfighter who was seen his best days in the arena. Their collision is going to change them both. The film was supposed to release on March 20, 2020, in Theaters.

A comedy film Deerkskin written and directed by Quentin Dupieux with starring Jean Dujardin and Adèle Haenel. It already had its world premiere at the Cannes Film Festival in the Directors’ Fortnight section on May 15, 2019. Soon it was released in France on June 19, 2019, by Diaphana Distribution. The movie went on screening at the Toronto International Film Festival on September 12, 2019. It was scheduled to be released in the United Kingdom on June 5, 2020. However, it was canceled due to the covid-19 pandemic.

A British comedy-drama directed by Autumn de Wilde. It was based on Jane Austen’s novel of the same name Emma of 1815. The story follows Emma Woodhouse, a young woman who interferes in the love lives of her friends. It was released on February 14, 2020, in the United Kingdom and in the United States on February 21, 2020.

On March 20 Emma was released to streaming platforms in response to the increased restrictions on screeing in movie theaters due to the covid-19 pandemic.

Fast & Furious 9, also known as F9, is an American action film directed by Justin Lin and written by Daniel Casey, which is a sequel to 2017’s The Fate of the Furious.

In F9, Dominic Toretto and his family is going to face a new, deadlier enemy in the form of Dominic’s younger brother Jakob(John Cena), as well as their old threat Cipher (Theron).

Directed by Niki Caro Mulan is an American action film with the screenplay by Rick Jaffa, Amanda Silver, Lauren Hynek, and Elizabeth Martin, which was produced by Walt Disney Pictures. Mulan is based on the Chinese folklore “The Ballad of Mulan,” which is a live-action adaptation of Disney’s animated film of the same name, which was released in 1998.

The film had it’s a world premiere in Los Angeles at the Dolby Theatre on March 9, 2020, and scheduled to be released in the United States on March 27, 2020, but was delayed due to the covid-19 pandemic.

Nina wu is directed by Midi Z with the writer both Ke-Xi Wu and Midi Z. It was supposed to be released on March 20, 2020.

The story focused on Nina Wu, a girl who leaves a small theatre company in the country for the big city pursuit to complete the dream of being an actress.

The new rescheduled date is yet to be announced.

No Time to Die

No Time to Die is spy film the 24th installment in the James Bond film series, which was produced by Eon Productions. It was directed by Cary Joji Fukunaga. The movie is supposed to be released on April 10, 2020, but postponed due to the covid-19 pandemic. The movie No Time to Die will is now scheduled for November 12 in the United Kingdom and November 25 in the United States.

Nuestras Madres is a Spanish word for Our Mother, which is an internationally co-produced 2019 drama film by César Díaz, who is both director and writer. The Nuestras Madres was selected as the Belgian entry for the Best International Feature Film at 92nd Academy Awards. It was supposed to release on April 3, 2020, but postponed due to the covid-19 pandemic.

The rescheduled date is yet to be released.

On a Magical Night

On a Magical Night, also known as Chambre 212 in French, is a 2019 comedy film both written and directed by Christophe Honoré. On a Magical Night had its premiere in the Un Certain Regard section at the 2019 Cannes Film Festival, which on May 19, 2019, and released in France on October 9, 2019. It was supposed to release on March 27, 2020, but postponed due to covid-19 pandemic

The rescheduled date is yet to be released.

A 2020 computer-animated urban fantasy Onward is produced by Pixar Studios for Walt Disney Pictures. It was directed by Dan Scanlon and produced by Kori Rae. The film was premiered at the 70th Berlin International Film Festival on February 21 20, 2020, in the United States on March 6, 2020.

Also Known as Peter Rabbit 2, in short, is an upcoming 2020 American live-action and computer-animated comedy film which was directed by Will Gluck and written by Patrick Burleigh and Gluck. The film is a sequel to 2018’s Peter Rabbit. The movie is originally set to be released on April 3, 2020, and March 27, 2020, in the United Kingdom, but postponed to August 7, 2020, due to the covid-19 pandemic.

Directed by Lydia Dean Pilcher, Ginny Mohler, and written by Ginny Mohler, Brittany Shaw, Radium Girls is based on the true events of Radium Girls who led to significant and lasting impact in the area of workplace health and safety and the study of radioactivity. The movie was supposed to be released on April 2, 2020. but postponed due to the covid-19 pandemic.

The rescheduled date is yet to be decided.

An action-comedy adventure film based on the video game published by Sega, “Sonic the Hedgehog.” Due to the negative reaction of the first trailer, it was delayed by three months to redesign Sonic. The movie was released at Paramount Theatre on January 25, 2020, and theatrically released in the United States on February 14, 2020. On March 20, 2020, Paramount announced that Sonic The Hedgehog would be released to home media because of the covid-19 pandemic. Digital purchases will be available by the end of March.