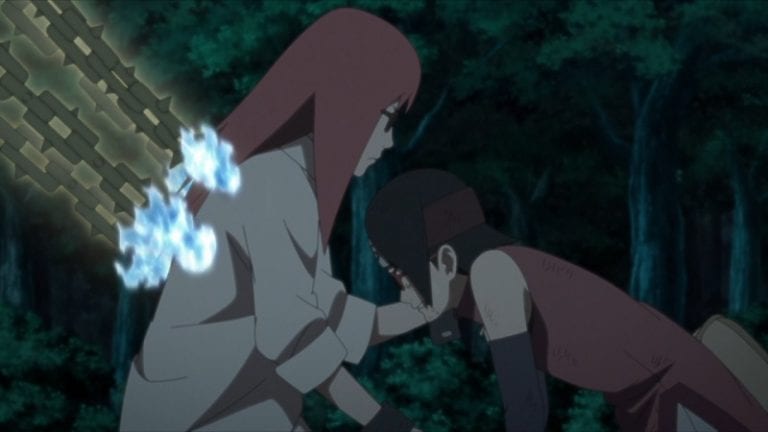 Boruto anime is currently going through another, you guessed it, filler arc. The fillers don’t look like ending soon so; I don’t think I will be optimistic anymore. The current arc focuses on Jugo, one of the subjects of Orochimaru. The arc has been average like almost every other arc in the series.

Before we start, let me warn you that this post has spoilers. If you don’t like being spoiled, then I would advise clicking away from the article. Now that we have got it out of the way let’s begin.

Here is a summary of what happened in the last episode— In the previous episode, we saw Boruto and co — falling for the trap of the enemies. The enemies just wanted to get Jugo’s body and use it to power the Curse Marks. Sarada and Karin were heavily involved in the episode. The two of them took on an enemy who was proficient at using the Curse Mark.

Sumire also fought alongside Nue but, slowly Nue started to lose control of its powers. The episode was fairly decent.

The episode will be released on April 21, 2019. You can watch the episode on official streaming sites such as Crunchyroll.

The arc is at its climax so we should expect a few more fights. Hopefully, after this arc wraps up, we will finally see some content from the manga being adapted. It’s been far too long since they too something from the manga. Ever since the Momoshiki invasion arc ended the quality of the anime has gone down. There have been glimpses here and there but nothing special.