Trigger is a Tamil comedy action film released on 23 September 2022. The movie is directed by Sam Anton and produced by Prateek Chakravarty and Shruti Nallappa under Pramod Films and Miracle Movies. Sam Anton and P.S. Mithran wrote the film’s storyline.

Atharvaa, Tanya Ravichandran, and Arun Pandian star in the lead roles. Trigger is the second collaboration of Atharvaa and Sam Anton after 100. The film is 140 minutes long, which allows us to experience sensitive issues on a fundamental level.

There are many movies based on the plot of child trafficking. Trigger is the latest addition to the list. In the film, an ex-cop’s son has to save his father, who is suffering from Alzheimer while chasing the mastermind of a child trafficking racket. The movie is not different from any other south Indian action drama. It received positive reviews from critics and viewers and succeeded at the Box Office. 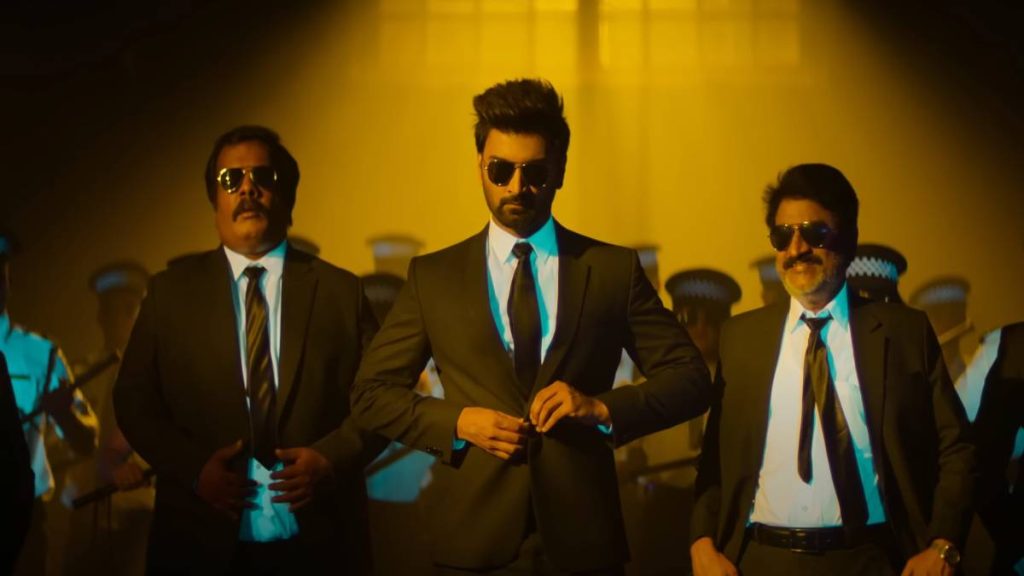 Actors who were seen in supporting roles were Rahul Dev Shetty as Michael, Munishkanth as Killi, Chinni Jaynath as Perumal, Pradeep Benetto Rayan as Deva, Azhagam Perumal as police commissioner and Sampath Ram as DCP Karunakaran.

Prabhakaran, a suspended cop, is assigned to the undercover squad of the Tamil Nadu Police Department by the police commissioner. He is informed that his brother, Karthi’s adopted daughter, Nisha, is kidnapped. He starts investigating and follows a suspect, Aadi. He attacks Aadi and saves Nisha. Later, Prabhakaran uses him to capture the leader of their kidnapping gang. As soon as the news reached the leader, he decided to kill Aadi, who was under surveillance and tight security. 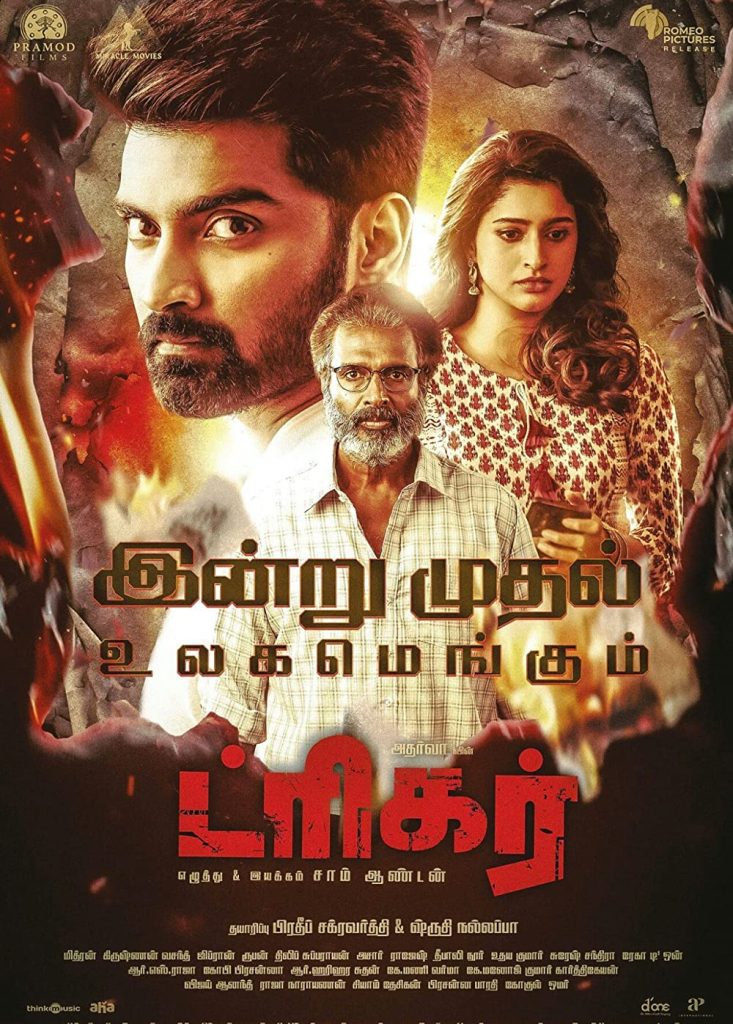 After Aadi’s murder, Prabhakaran digs deeper into the case. He discovered that the kidnappings were related to an attack that occurred in 1993 at the Police commissioner’s office by a gangster and Aadi’s father, Michael. He finds that his father, a former SI, was dealing with the case earlier.

Michael was running a child trafficking racket and would disguise his men as parents who would adopt children from an orphanage and hand them over to Michael after three years in exchange for money. Sathya Moorthy started investigating the case after a couple complained about it.

Sathya Moorthy collects the pieces of evidence against Michael and reaches the commissioner’s office to submit them. Still, Michael attacked the office, injuring Sathya Moorthy, who lost all his memory of the incident. Sathya Moorthy got suspended, and Michael was arrested.

After learning about Prabhakaran, Michael kidnaps 20 children and promises the parents to return them safely in exchange for money. Prabhakaran, with his team and team leader Deva, was waiting to capture him until Prabhakaran found out that one of the children’s parents was Michael’s man. He sent his teammates to protect the children at the orphanage where Perumal, one of his teammates, is killed.

Prabhakaran defeated Michael’s men and went to save Deva, who was caught in trouble. He learned that Deva was Michael’s son and a mole in the police department. Michael and Deva escape after shooting Prabhakaran. They kidnap Nisha again, but Prabhakaran tracks down their location with the help of his team.

They tracked down their bus, but Nisha was not present there. Sathya Moorthy follows the truck in which Nisha is held and kills Deva. To avenge his son’s death, Michael Plans to kill Sathya in his house but is killed by Sathya. At last, the children are brought back safely to the orphanage.

After 100, Sam Anton and Atharavaa gave us a nail-biting cop drama and thriller, which kept us hooked to our seats. Sam Anton provides us with the experience of a top-notch action drama. He perfectly directs the story on the concept where a criminal diverts the police’s attention to commit crimes.

Action sequences are shown at multiple places simultaneously. Major scenes running in parallel don’t confuse the audience but instead create suspense, thanks to good writing. The antagonist in the film is made of the same level as the protagonist so that no one seems to dominate.

Atharvaa did an excellent job in the film, making us empathize with the Protagonist, Prabha. Atharvaa’s co-actors didn’t fall behind in giving their best. Whether it’s Chinni Jaynath or Arun Pandian, they did an outstanding job in delivering their parts. Krishna and Vinodhini also did a decent job in playing the role of Atharvaa’s brother and sister-in-law.

Like any other South-Indian film, Trigger too has a romantic couple. Atharva and Janani turned friends from strangers, and it is still a mystery how their love story evolved. They are rarely shown having conversations. The only moment which hinted at their relationship was their warm hug and the discussion afterward. 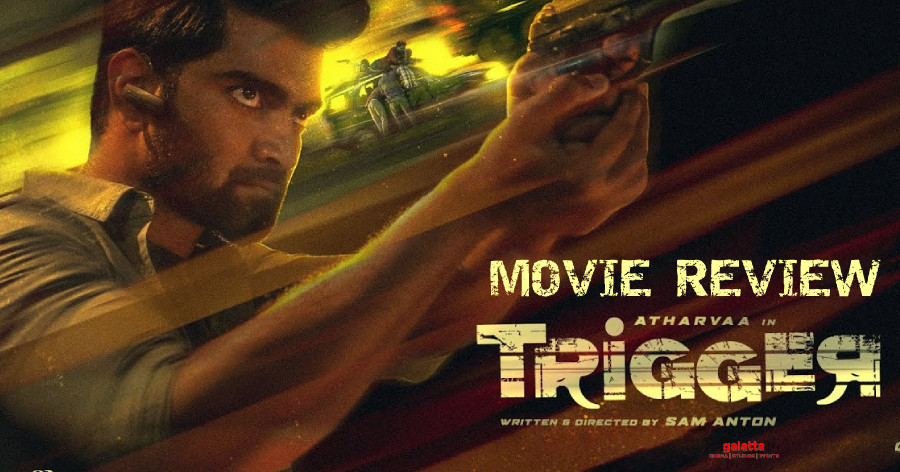 The negative points in the film may be considered minor. The movie lacks logic, which is common is south-Indian films. The action scenes can seem over the top. They are executed well but are a bit stretched and non-imaginative. The half-backed sequences can reduce the tension of the film.

The conflicts in the movie could have been made more emotional. The lack of logic is also evident in the movie. The jail for the villain is like his personal farmhouse, where he can walk out or walk in anytime he wants. The kidnapping racket also breaks its rules to capture a random girl making their identity vulnerable.

On a scale of 5, the film deserves 2.5. Despite its incredible storyline and good direction, the film seems illogical. The actors did an excellent job doing their parts, but the screenplay and writing could have been better. It could have been a blockbuster if the actors were molded in a good script. If you are a fan of action thrillers, this film is a good watch.