Its been a while since we get a new Dr. Stone chapter since the series has been on break for a few weeks. The beam was successfully detonated, and all the people in the vicinity was turned into stone. It is revealed that Senku is still alive and well, while Ibarra is surprised to see him still standing. In Dr. Stone Chapter 135, Senku’s survival technique will be revealed.

Ibarra successfully took the Medusa from Yo and petrified everyone from the vicinity. He then ordered someone from the tribe to bring the Medusa to the center of the village before giving the detonation beam. The plan was successful, but Senku and the Kingdom of Science have a better plan. And with this plan, Senku was able to determine how the Medusa works. 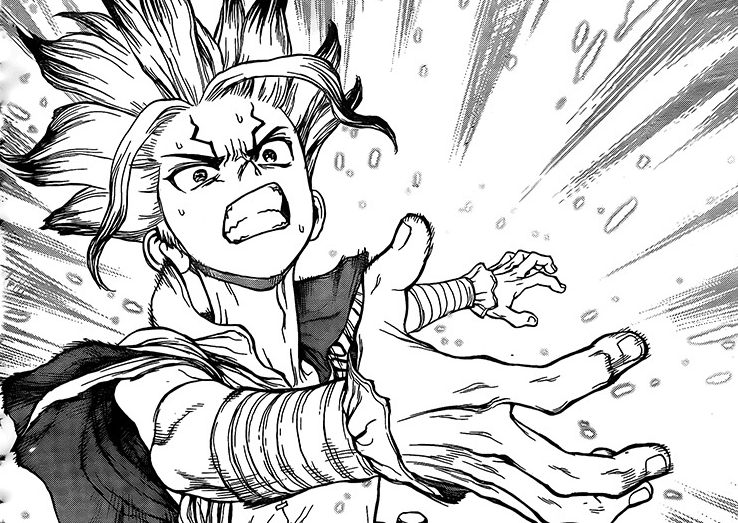 Ukyo was able to give very crucial information to Senku before he was petrified. In order to test a hypothesis, each member of the Kingdom of Science lined up with different hand symbols, representing the distance and speed of the petrification beam. That’s why they are in a very funny situation when Ibarra found them last chapter. Lastly, Senku watched the wave hit his friends before throwing the revival fluid up. Before he was completely petrified, his hand caught the revival fluid, petrifying him.

Therefore, Senku became the first person to be simultaneously petrified and unpetrified in Dr. Stone chapter 135. Still, his knowledge about the Medusa is still not complete. It’s expected that he will learn more about the device while fighting with Ibarra.

The time for the truth about the petrification that happened in the Earth thousand of years is getting near. Senku and the Kingdom of Science now know the cause of the petrification beam and that it can be commanded to affect an area specifically. Is it possible that the petrification was an accident? We will know in future chapters, so stay tuned for more spoilers.