The Monogatari series is well known at this point. The anime is based on a light novel series that consists of 27 volumes. The anime has multiple seasons, and getting into it can be a bit confusing. There is a reason why I avoided this anime for so long. Also, that toothbrush scene made me dismiss this anime as just another harem show filled with fan service. But I finally decided to give it a try and started with the 1st one, Bakemonogatari. I have to admit, and I was an absolute idiot to avoid it for so long because this anime is an undeniable masterpiece. Now, that is a bit subjective, but everything about this anime works. The animation, the direction, the characters, the soundtrack, just everything.

This anime has a personality, and that’s saying a lot. It is a bit similar to Bunny Girl Senpai(general plot-wise). But it is also way better. Don’t get me wrong, Bunny Girl Senpai is a good anime, but it has certain problems as well, and it does come off as a bit bland, at least in terms of animation.

I am not a big fan of light novels. Most of the ones I have read usually follow a similar pattern as shonen mangas do, and they feel quite shallow. But after finishing Bakemonogatari, I think I was just an ignorant fool. The writing of this anime is amazing. Sure the show follows the typical framework of a harem anime, but it’s so much more than that. This show is the prime example of how sticking to general tropes doesn’t necessarily mean that it’s a bad thing. The story is simple. It revolves around a guy named Ararrararaagi…sorry I stuttered, Araragi, who used to be a vampire. And in each arc, he helps a different girl overcome her problems. All the problems are caused by encountering an oddity.

Yes, this anime has a supernatural element in its narrative. But even though all the problems are caused by otherworldly entities, they are very human at their core. I want to give an example to elaborate on this point, but it is better that you see it for yourself. Also, this is where the narrative resemblance with Bunny Girl Senpai comes into play. The problems of each girl manifest because of a supernatural phenomenon. And these supernatural problems are more like a metaphor for what they are going through. It is a bit more subtle here, though. This supernatural element is also explored in detail here, and it also leads to some cool and visually breathtaking fight sequences.

The story is entirely told from a first-person perspective, and this anime takes that into account. There is a ton of minor detail in the environment to fit this first-person narrative perfectly. And the show is directed accordingly.

The way this show is animated and presented gives it its personality. Seriously, this is one of the most unique animations I have ever seen. The characters do look generic, but their personality more than makes up for it. It is done to put us in Araragi’s boots. For example, the first thing you will notice in this anime is frequent cuts every few seconds. And these cuts flash a colored screen with some text on it. They are supposed to show what the MC is thinking and feeling. Sure they can be a bit jarring, but they ultimately make the show more immersive. And there are also frequent color swaps where the whole pallet will change to fit the scene’s mood, like in JOJO.

Another thing you will notice is that the world is empty. There are no background characters whatsoever. This, too, is done to show how the MC perceives the world around him. In some scenes where the characters are seen sitting in the classroom, it is implied that the background characters are there. It’s just that they are not shown to us. You will also notice that all the cars and bicycles look exactly similar except for the bicycle that the MC uses. Most of these things were initially done because of the limited budget, but they became the staple of the franchise. 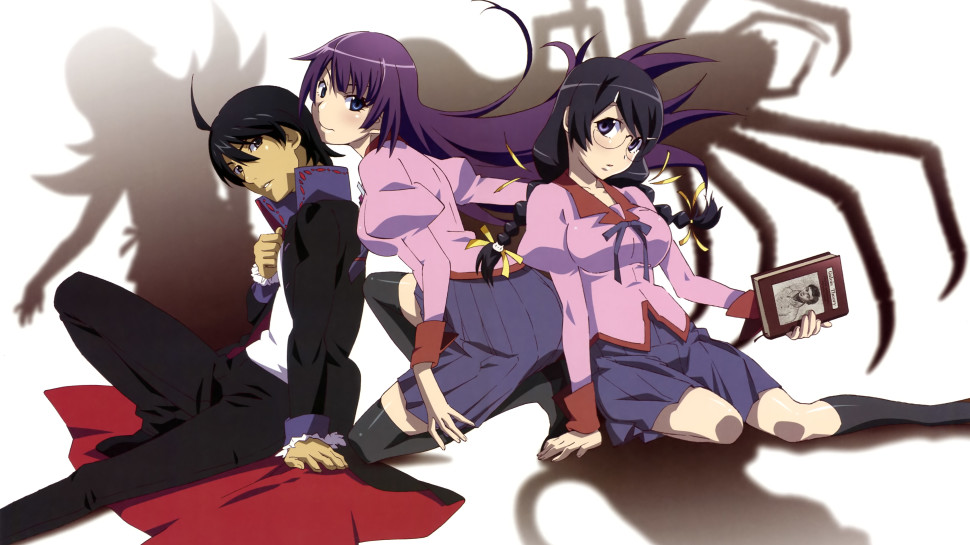 I will keep this one short and vague because the less you know about them, the better. It is quite nice, getting surprised.

The main guy, Araragi, is a pervert. His GF, Hitagi, is a tsundere. And I can go on and on. And on the surface, the characters are based on the common harem tropes. But that can’t be farthest from the truth. The characters are well fleshed out, and there is so much more to them that you can’t merely sum up their personality in just one word. There is a reason why their problems, though supernatural in nature, feel personal and real. There is an actual reason why Araragi’s GF is a tsundere. Everything she does has a logic behind it, and you will be able to understand why she is acting the way she is.

To give you guys an idea of how well good the character development is, it is so good that it justifies all the fan service. Yeah, this show is full of fan service, and I never like that in a show. But here it is, at least not there for no apparent purpose. It has an actual reason for existing. Sure there are other ways of showing what the characters are feeling, but these fan service moments work well and are quite funny. I mean, it is either that or I have completely become a degenerate weeb.

I think you should definitely check this anime out. The fan service moments might put you off but believe me, they are not totally useless and do have something to contribute. The animation and the overall presentation of this show are unique and make it stand out. I really loved it and am excited to watch the later seasons. Also, one thing I forgot to mention. This anime is chock-full of references and meta-humor, and this too isn’t done lazily.