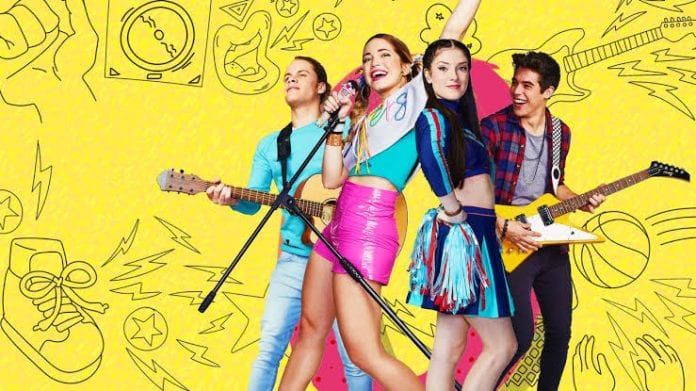 One thing that we love about Netflix is its ability to produce successful YA/ Young adult TV shows over the years. ‘Go! Live Your Own Way’, originally called ‘Go Vive a tu Manera’, is one such example. It is one of those shows that deserves a special mention in the category of YA Netflix shows. It is the show that had become the first teen or high-school series from Argentina. It has all those elements of love, drama, and dance and music.  It is a musical series filled with oodles of fun.

If you have seen YA series such as ‘Atypical,’ ‘Sex Education,’ ‘Everything Sucks,’ etc., you might want to give ‘Go! Live Your Own Way’ a chance. The series is produced by Onceloops and Kuarzo Entertainment, and it first premiered on February 22, 2019, on Netflix. It did pretty well for itself after it came out. The second season, consists of 15 episodes, was released on the 21 June 2019.

The cast of ‘Go! Live Your Own Way’ includes Pilar Pascual, he plays the high school singer Mia Caceres. There’s the character of Mia, who is shown to be rebellious, she sings and dances well. There’s Renata Toscano in the role of Lupe Achával, Jose Gimenez Zapiola as Álvaro Paz, and Santiago Saez, who plays the role of Juanma Portolesi. For the next season, the main cast is likely to return. Many new faces may join them; it is being rumored. Amongst the recurring cast; iSmón Hempe as Federico Nacas Daniel Rosado as Nicolás Ferrari, Manuel Ramos as Tobias Acera, Bautista Lena as Martín Beltrán, Anonella Carabelli as Olivia Andrade, Carolina Domenech as Lola and Nicole Luis as Ivana are all expected to be back.

The series is created and directed by Sebastian Mellino. The story revolves around Mía, who gets a scholarship to an elite performing arts school. She ends up making friends and enemies both the owner’s popular daughter. Let’s hope the TV series comes out soon.

Jay Patel - January 12, 2020 0
In this post, we are going to talk about Doctor Romantic season 2 episode 3 release date, time, streaming details, and preview. The show...

Xbox Series X Next-Gen CPU Unveiled – Here Are All The...