The developers of Dead Cells, Motion Twin and Evil Empire have announced that additional content will continue to come out for the game in 2020. The first DLC for the game has been revealed and the devs will be supporting the game and they have about two years of content planned for Dead Cells. This DLC will be the game’s third one and will be dropping in the Q1 of 2020.

It is named as The Bad Seed. In the game’s steam blog post the devs wrote The Big Seed “brings two new early game biome s and a big #$&%-off boss for you to bash your head against.” Moreover, the price of this DLC has been revealed which will cost $5. In this upcoming DLC, you will be able to visit The Arboretum, a location that is called tranquil with nothing dangerous of note. 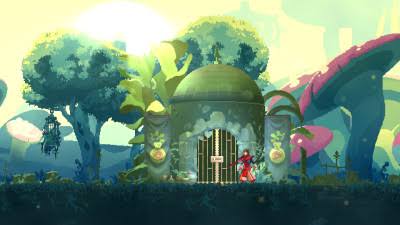 Another location called The which is described as “putrid, tick-infested cesspool inhabited by spear-wielding, blow dart firing jerks.” Furthermore, there will be a new boss in the game which has been teased in the photo that you can see in the above picture. Moreover, Motion Twin and Evil Empire said that they want to add plenty of new content to Dead Cells, including balancing changes to “glaring problems.”

They also said they will be “building out a bunch of new creatures and replacing some of the more tired types with biome specific beasts.” Dead Cells will be also getting new weapons, additional secret areas, and lore too. If you want to read the official blog post, you can do so by clicking right here.