A young priestess on her first quest throws in her lot with the Goblin Slayer, whose only concern is exterminating goblins, and She’s got a lot to learn. A band of adventurers, including a human priestess, an elf archer, a dwarf shaman, and a lizard man priest, follow a famous goblin hunter on a quest to destroy the hordes of aggressive goblins that threaten to ravage the land. Goblin Slayer is the series’ main character. He is an experienced silver-ranked adventurer who only concerns himself with hunting goblins.

This anime starts as many fantasy adventures do; light-hearted with a beautiful score. However, things turn intense and graphic very quickly. It has Violence, Brutality, and Gore (Bloodshed) right from its first to the last episode. This anime would definitely satiate your hunger pangs if you are looking for an Isekai Seinen Grotesque Anime with some Slaughter.

If you think Goblins aren’t more than just some low-level monsters then be prepared to change your views about goblins after seeing this anime as it feasts your eyes with, what goblins are capable of and how the goblin slayer handles them with some great intellectual skills.

The character development throughout the series is ok, but before the final battle when he falls into a desperate situation for help it does take a 180° turn on his personality traits which does seem quite surprising. The side characters do entertain a bit with their different traits as they help in adding humor, gratitude, zest, grit, and curiosity.

Here are some reasons which might interest you to see Goblin slayer:

Take this anime’s title as literally as possible. Goblin Slayer is about a mysterious warrior clad head-to-toe in medieval armor who has the greatest hatred for goblins you can imagine. Having faced a tragedy in his youth, the man adopted the nickname Goblin Slayer and worked his way up the ranks of adventurer society killing nothing but goblins, even as more appropriate missions for his skill level became available. Other adventurers look down on him and mock his single-minded obsession, but Goblin Slayer cares little for their opinions on the matter. His quest is both impressive, admirable, and even a little hilarious, despite the tragic backstory behind it.

However, his character is not as one-note as you’d think. Yes, his entire life and most of his dialogue are about goblins, but there is an arc about him growing fond of his companions and then trying to help him become a better person, which he appears to take to heart. He is stubborn, but certainly not unreasonable and he does care about the people around him.

The world of Goblin Slayer is very much a traditional fantasy one that will be familiar to anybody who has ever dabbled in a bit of (tabletop) gaming. Swords & sorcery, dwarfs & elves, good & evil, it’s classic stuff and pretty light to get into. The lore behind the world is kept deliberately simple, focusing more on the characters within it and how they interact with each other.

Goblins are just little pricks that raid villages and kidnap the women, they are an ambiguously evil force looking to conquer the world, and adventurers gather in a guild to pick up local quests for payment. It’s not too concerned with nuance or politics, and that is fine if you’re going into it just wanting to see a fun adventure about a guy that murders goblins. 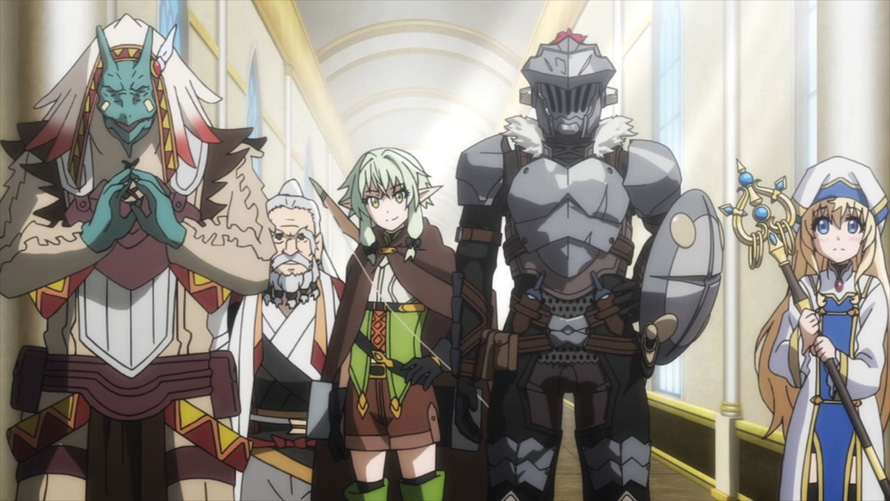 A Huge Cast of Interesting Characters:

Ignoring the “everyone will get killed and/or raped by goblins” thing, Goblin Slayer has a great cast of characters helping him throughout his goblin-slaying mission. Yeah, sure, all of the characters literally have no names and they’re only identified by their class like Priestess, Elf, Dwarf, and Lizardman, and their personalities match their class, but it’s the little things that make them memorable and likable.

Elf has fast reflexes and has a bit of an attitude towards Dwarf because Dwarf mocked her for her flat chest. The dwarf is short, is always drunk, and he always gets into petty arguments with Elf because both races are sworn, enemies. Lizardman is the one with a carefree view of the world and loves cheese. There is more to these characters than their roles and with season 2 on the horizon, we’ll get to learn more about their backstory.

The Bloodshed in this anime is what has appealed the most to everyone. Almost every single episode contains gore scenes. The most infamous scene is the rape of Fighting Girl from Episode 1 of the anime. The slaughter in the final arc has great amounts of bloodshed which is my personal favorite.

Goblin Slayer stood out for not being another generic anime and stuck to its own distinct plot. The anime was good at showing how vicious and dangerous these green midgets (Goblins) are. Every mission is a life-or-death situation and one mishap will not only get Goblin Slayer and his party killed, but they’ll also be letting goblins roam free and wreak havoc. And despite the somber tone, the characters still manage to bring some smiles, laughter, and a sigh of relief that they can live another day. Give Goblin Slayer a shot and who knows, the anime may be your gateway to the darker side of Isekai and fantasy anime.

Top 10 Things To Know About Batman