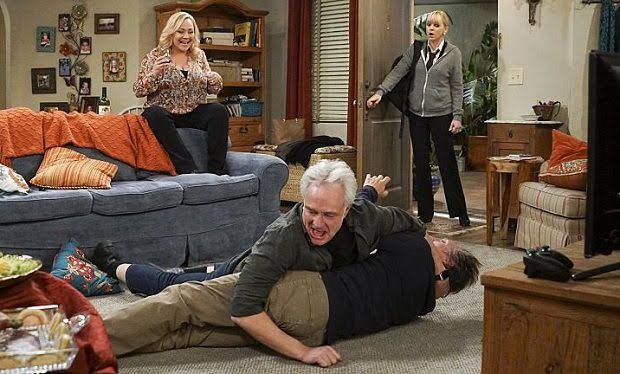 Mitch is one of the hilarious characters on the show, although the character does not even need to joke. His habits generate a natural laugh, and the rest work is done by the situations. Mitch is addicted to alcohol, and it puts him in a different awful situation where only viewers can laugh. Because Mitch is Adam’s friend, he has been having a good and light-hearted moment with Christy and Bonnie.

So, the character is returning to the show again, as it was confirmed by a tweet from from Allison Janney, who plays Bonnie on the show. Take a look at their adorable picture!

Bradley Whitford has been actively acting on the small screen as well as films. Who can forget his iconic antagonist role in 1995 movie Billy Madison? It was a comedy film, and he was cast opposite Adam Sandler. Recently, he played the lead role in the 2017 film Get Out. But, I am more than happy to see him returning to Mom, as it is his one of the most iconic roles although his other iconic role was in The West Wing as Josh Lyman.

Another thing which makes his return cute is that we will be able to see Allison and Whitford again together. It has been a long time since they were together on TV, as they were together on The West Wing. Above all, Mitch is confirmed to be a changed man. So, watch Mom’s next episode to know what change does he have. Here is the tweet from Warner Bros. which evinced his new role!

Mitch returns and insists he’s a changed man in tonight’s episode of #Mom at 9/8c on @CBS ! @MomCBS pic.twitter.com/9GvPx7aTW7