Giorno and Mista almost died in the previous episode of JoJo Golden Wind. The member of the Hitman Team, Ghiaccio, almost killed them both. With the rather difficult enemy to beat because of his powerful Stand, Giorno decided to drive the car into the river to escape Ghiaccio. Will they finally defeat the enemy and his White Ice Stand in JoJo Golden Wind episode 19? 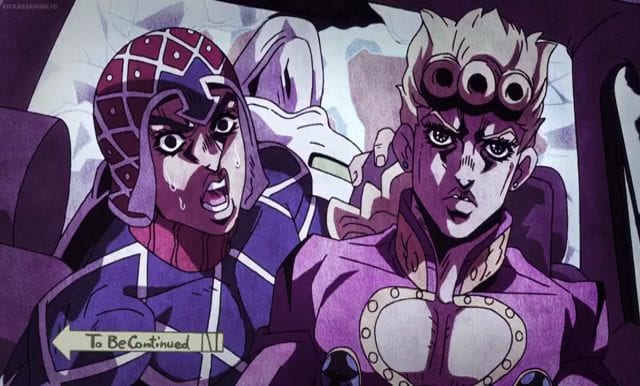 Giorno will successfully get the car into the canal in his hopes to slow down the enemy. He thought that the freezing would slow down once they’re in the water. Unfortunately, Ghiaccio can freeze water with the same speed because of his cryogenic ice ability. Narancia and the rest are also traveling to Venice using a boat, securing Thrish.

With the plan backfiring, Giorno orders Mista to get out of the car and go to the shore before the entire canal freezes. The statue can be seen from afar. Giorno tried to make a rope so they can escape, but Ghiaccio used his stand to freeze the vines. Because Giorno can only make life that can thrive in the snow, he produced short grasses which Mista tried to use an ice sled. Before Mista can get to the shore, Ghiaccio canceled the freezing, which causes Mista to fall in the water.

But because of the freezing canceled out, Ghiaccio fell into the water too. Mista noticed the bubbles and deduced that there is a hole in Ghiaccio’s armor. Giorno warned Mista and told him to go to the shore while Ghiaccio is under the water. However, he did not comply and tried to kill the enemy, but the bullets he fired backfired. However, because of Giorno’s quick thinking, Mista used the grass in his bullet, Giorno canceled Golden Experience, and the grass returned to car parts, making Mista’s shot into a car part shot. Mista will finally have time to get the disk, but will he be able to leave Giorno behind? That’s it for JoJo Golden Wind episode 19 spoilers. Stay tuned for more spoilers.