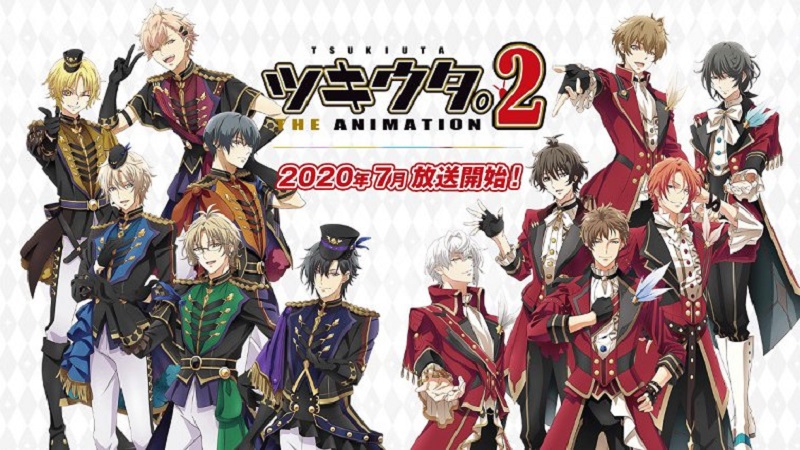 The long-awaited 2nd season series of Tsukiuta, which was originally set to release in 2019 and was pushed to April 2020, is delayed again because of the COVID-19 pandemic. The series was now set to premiere in July 2020. The series is like the other idol anime like bang dreams and the type of anime, which gets a lot of attention for girls and especially the BL lovers.

Tsukiuta is a character cd series which was initially started between Vocaloid producers and the popular voice actors(seiyuu). Now Tsukiuta has become a media franchise like multiple stage plays, manga, video games, and now the upcoming anime.

The anime is Tsukiuta The Animation portrays the daily life of the twelve men, like how they have fun together, the stress of being an idol, schools, and more. 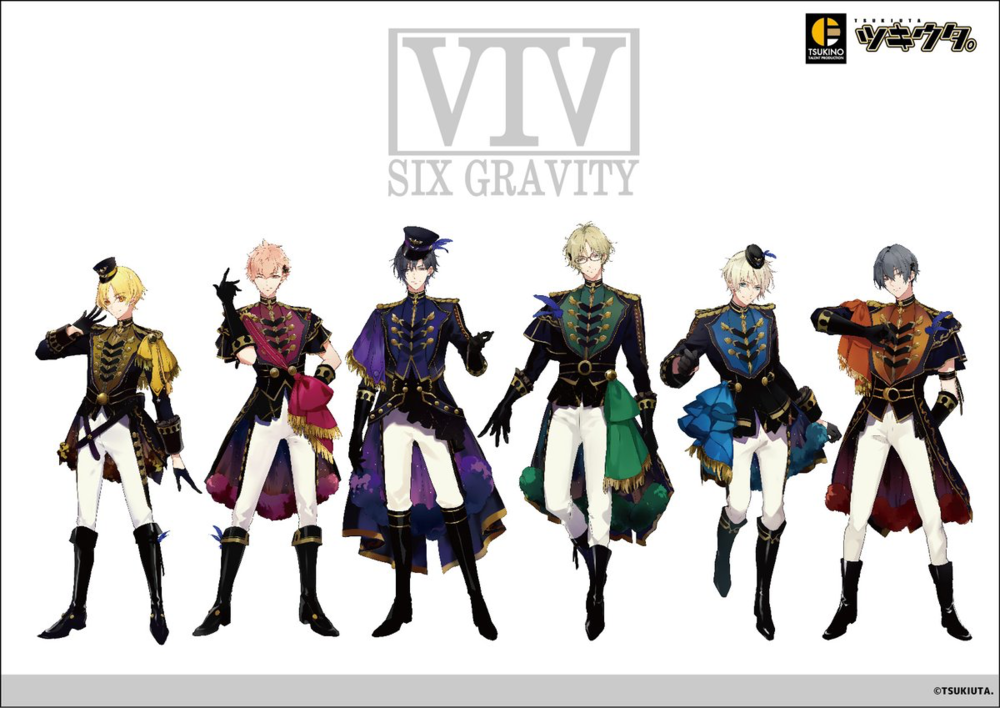 In Tokyo Metropolitan area 23rd ward, a group of unique members scouted by TSUKINO Ent. who are scouted by the gigantic black rabbit, Kuroda. They’ve debuted as the Idol unit, “Six Gravity,” and are doing well. The group’s manager is Tsukishiro Kanade. 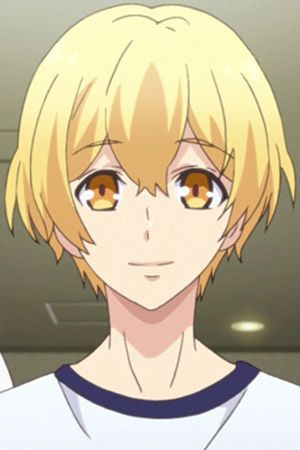 He has a happy going cheerful personality and gets along with everyone, one, both his team members and their rival members of Procellarum. He is rarely discouraged sometimes but gives his best on work and does not like to lose. Kakeru is sensitive when it comes to his height because he is the shortest among the two groups, which is why I was treated like a child. He feels that his hight might make him seems like an undependable person.

Kakeru is indeed the shortest among both Six Gravity and Procellarum members but also a fair-skinned young male. He has blond hair and orange eyes. His signature is color is gold. 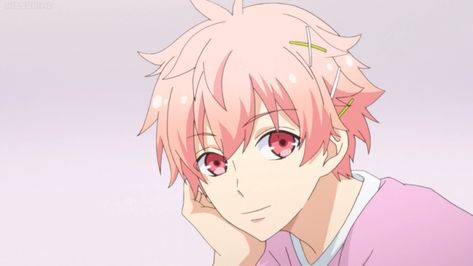 Kisaragi Koi is a naturally friendly person, which is why it is good at socializing and has a lot of friends from both genders. Not only is amiable he is also a hard-working, straightforward and quite well-informed guy. As a result of this personality, he gets along well with their staff members.

He looks out for everyone, which also might be the reason he resembles the big brother type character. He likes the Tsukkomi joke and throws sharp retorts and also a good mood maker.

Koi is one of the former children of the unnamed former goddess. His younger twin is her sister, Ai, who is also a Goddess Candidate.

Koi Kisaragi has a short light pinkish hair and sightly darker pink eyes. The hairpins he wears are the gifts from his twin younger sister, Ai. He is the youngest member of Six Gravity and Porcelllarum. His signature color is pink. 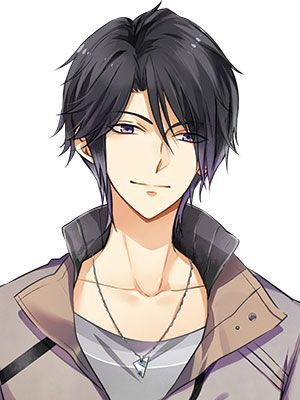 Hajime Mitsuki has a commanding presence and is hailed as if he is the king. He stands out more compared to the other people and is quite charismatic. He is quite blunt but sometimes sarcastic and severe. And also takes good care of those around him.

Hajime was the top student of an all-boys elite private school and cans speak English very well. Not only his intelligence, he also possesses excellent physical strength, which is why he was called Iron Clow by Kisaragi Koi.

Hajime is from a noble Mutsuki family. He knows Haru since they’re assigned to the same class in their 2nd year of Junior High School.

Hajime is a tall and well built young male with black hair with a lock highlighted in purple. He has purple eyes. His signature color is purple.

Mutsuki Hajime is the leader of the Six Gravity idol unit. His partner is Yayoi Haru. 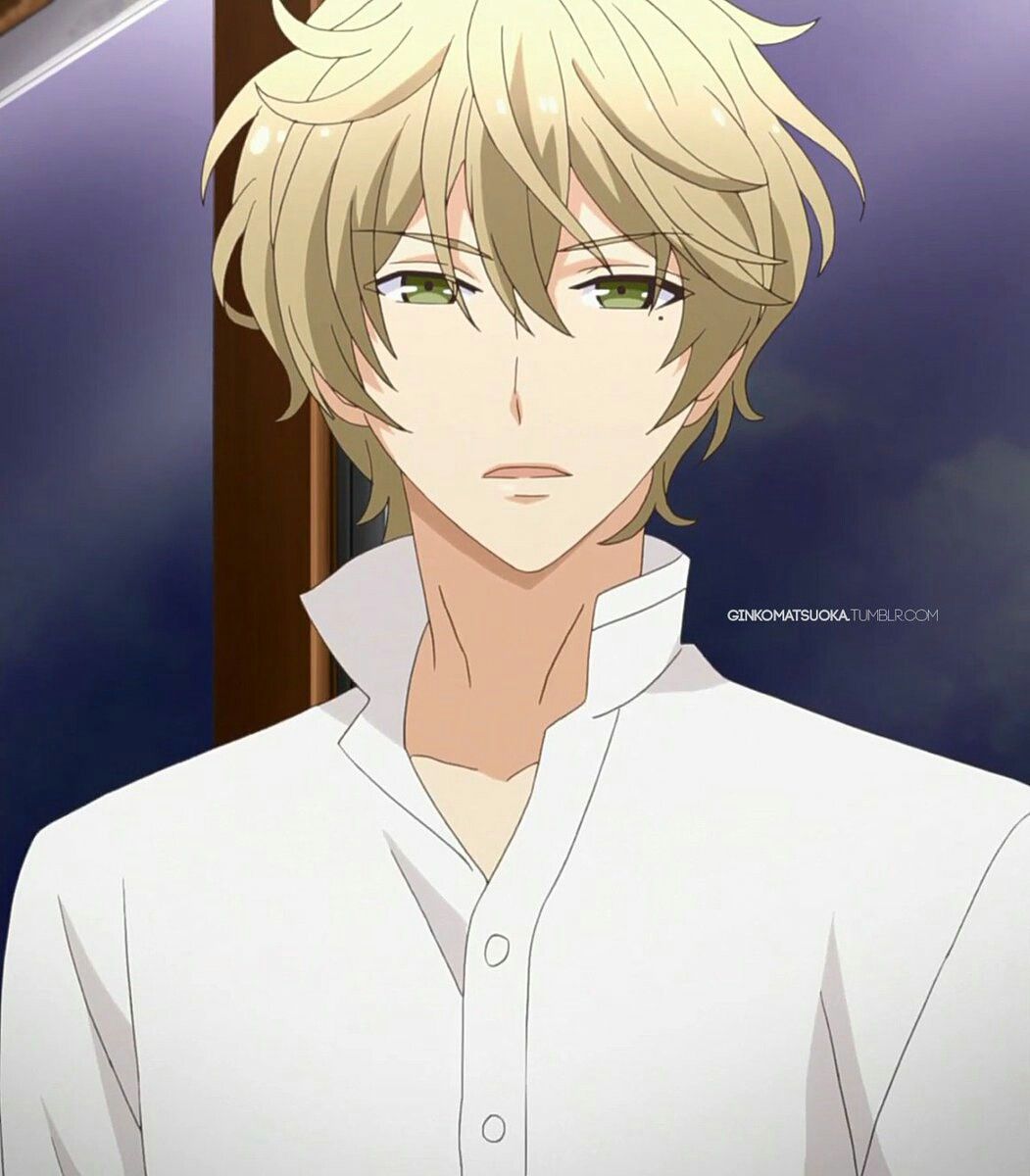 A calm and gentleman, he is also the type who everyone and is looked up by those who were younger than him. He tends to avoid conflicts as he is weak at arguing. He is also very intelligent like Hajime but was beaten by him twice in academics. But he is also known as the “Trivia King,” aka “Harupedia.”

He was scouted together with Hajime when they were on his way home and found Kuroda, who is collapsed by the road.

Yayoi Haru has a yellowish light green hair with a natural lock of hair. His have lime green eyes and an ole under his left eye. Although his eyesight isn’t so bad, he is the only idol who wears glasses. His signature color is light green. 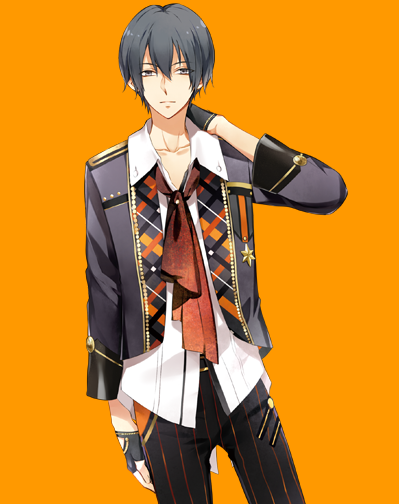 Arata is a laid-back type who likes to do things at his own pace once he loses his enthusiasm; he is quite hard to handle. When it comes to his interest, he goes his way out to have fun. His lack of expression makes him unsociable and coldhearted.

Arata has a greyish black hair and grey eyes. He always gave an expressionless face and said to resemble his mother. 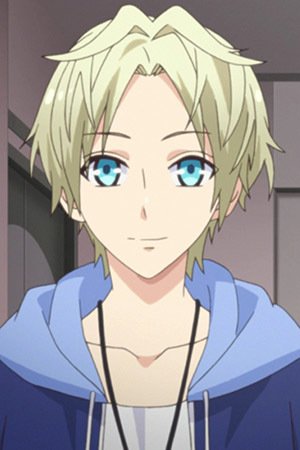 Aoi Satsuki has fine soft blonde hair and is described as very handsome like the rest of the Satsuki family. He is a very adult-like and mature type who looks after the group together with Yayoi Haru. He is a diligent and serious person, and he is quite when it comes to love stories. 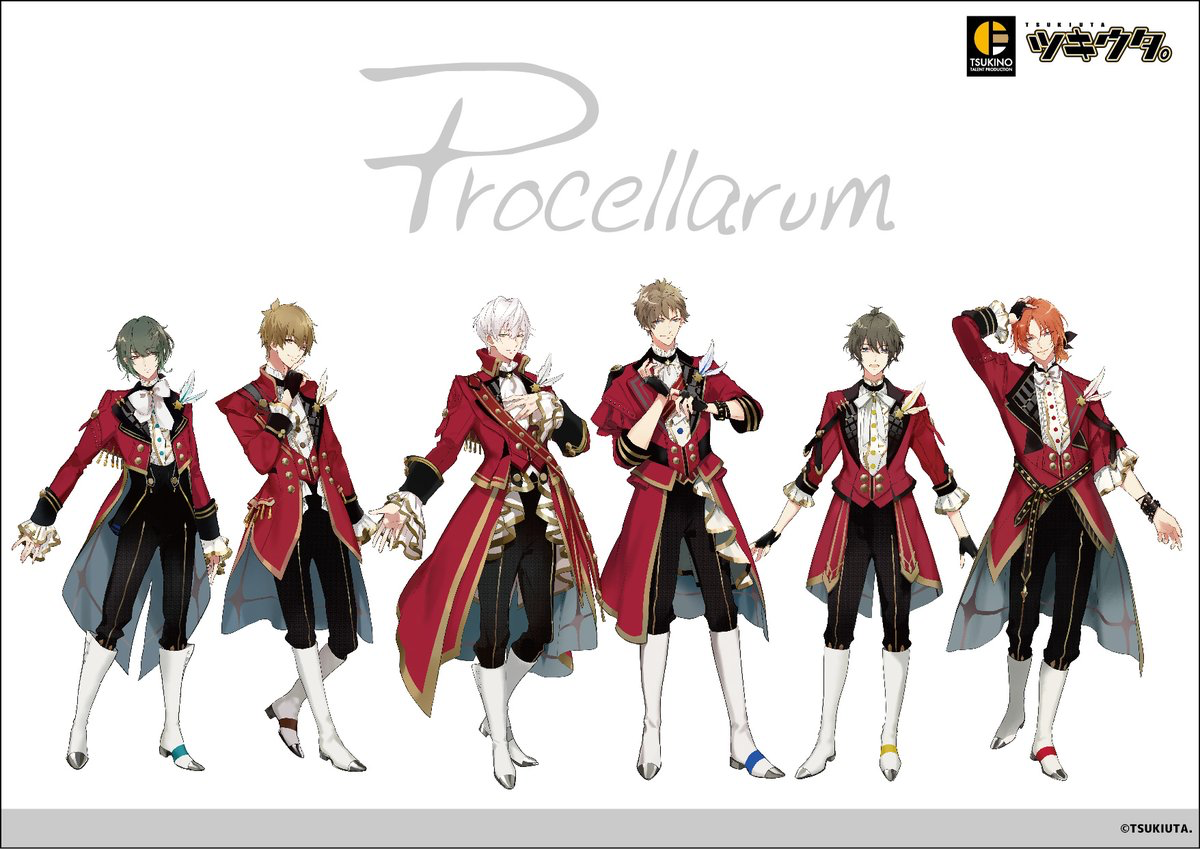 Procellarum is an Idol group from western Japan, and they too are scouted by Tsukino Productions. They work with their producer and are the Six Gravity’s sibling rival unit. Their Manager is Kurotsuki Dai. 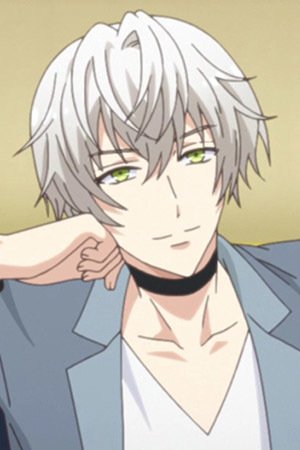 Shun Shimotsuki is known to be a bizarre and unpredictable person who does what he pleases. He is a playful and fun-loving person, sometimes he passed some of his works as a leaser to Kai, but he can work diligently. He is also known as the sole child of the once-powerful Shimotuski family from the east, which is like the counterpart of the Mutsuki family from the west.

He has silver hair and lime eyes. He is also known as one of the tallest guys among the other male idols in the Tuskino idol group and have a consistent black choker. 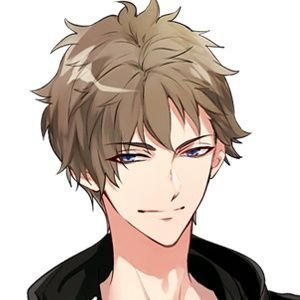 Kai is the bighearted, lively person, which makes him popular and respected among the other males. As he is the eldest brother in his siblings, he has a habit of giving pats to everyone on the head. He is a natural, welcoming, and accepting person but sometimes ends up doing the work of his leader.

Kai is a well-built young man and stands tallest among the male idols. He has light brown short hair, which he kept the windswept style and also has blue eyes.

He is the partner of Shimotuski Shun. 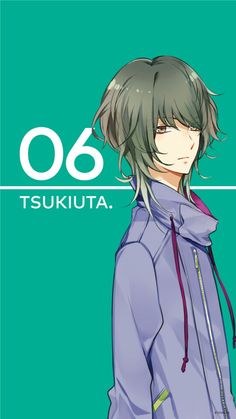 Rui is naive and innocent to which might be the reason why the leader Shimotsuki Shun has influenced his way of thinking. He does have a straight face but can do unexpected things sometimes.

Minaduki Rui has greyish-green hair and turquoise colored eyes. He has a scar on his body from the incident from his past when he was five years old. 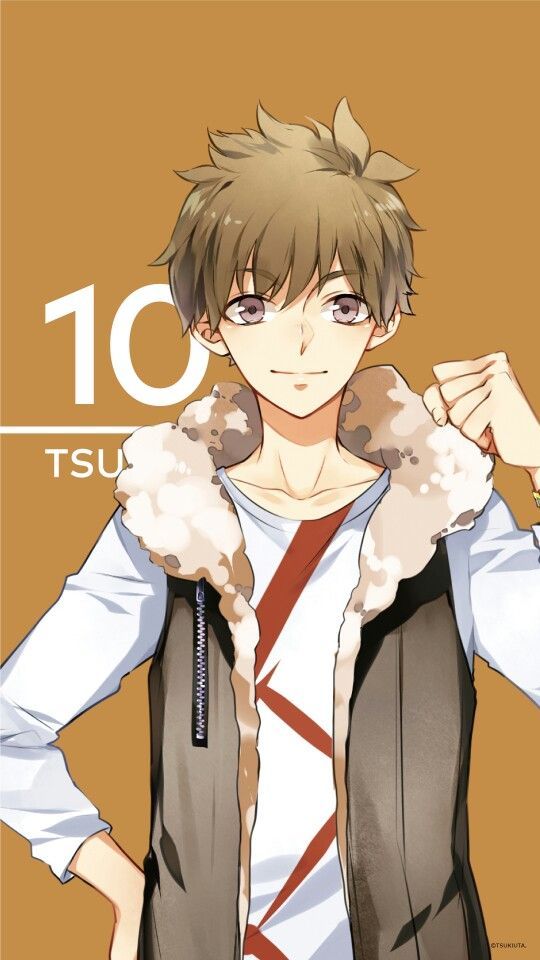 Kannada Iku is a lively, athletic, and type of person who won’t stay still. He is the guy who is aware of his surrounding peoples. Unlike other idols, Iku is from an ordinary family, and he sometimes makes retorts at his fellow idols.

He is the partner of Minaduki Rui. 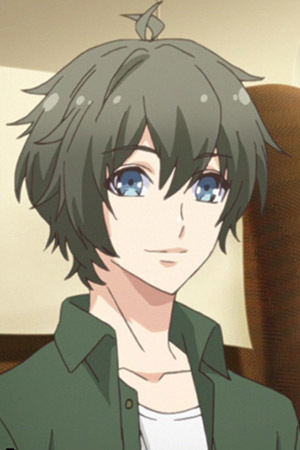 Nagatsuki Yoru is an earnest Guy. Not only is he earnest, he is also very mature, and doing things rashly is not his thing. Due to how he has a narrow and sloped shoulder, good cooking skills, his femininity is at peak. He got these personalities as well as the cooking skill from his mom, and now makes him Procellarum’s Mother.

As mature as he looks, but his quite plain and shy from the inside. He has black hair and blue eyes.

He is the partner of Haduki You

Haduki You is also known as the enemy of men, a guy who puts women above men. This is also the reason why he is popular with women. Other than this, he is known as a laid-back guy and can also be a troublesome person who plays with other people like putting them on trouble.

The anime series was first announced at the Animate Girls Festival 2014 event.