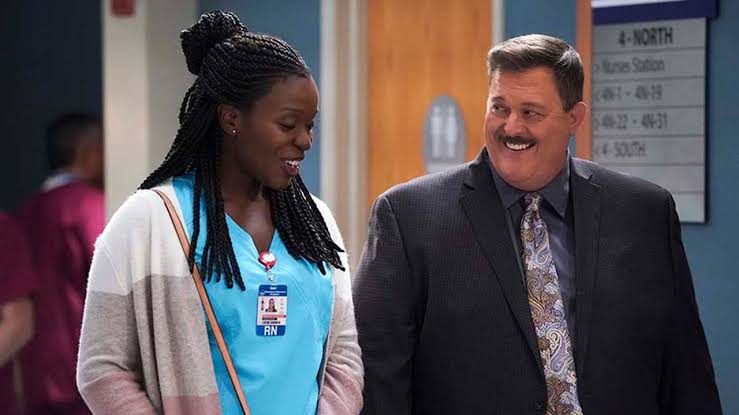 An able follow up of The Big Bang Theory, Bob Hearts Abishola is yet another creation of Chuck Lorre, which deals with the concept of love. It tries to portray love as the perfect blend of complication, spirit, and intimacy, which is difficult to achieve and impossible to discard. As the concept to love is paradoxical, so is finding a perfect love partner. You need to be both strange and humourous to find your ideal ‘soul-mate.’

Bob Hearts Abishola is an inclusive and authentic romantic comedy. You can watch the season on CBS platform. The trailer of the season is already out and so, is it’s 13 episodes filled with pure love!

The lead male hero of the series is Bob. He owns a profound family business that deals with socks. Bob runs his business with the help of his mother, Dottie, sister Christina and younger brother Douglas.

However, Bob apparently runs his business with huge mental stress. He is unable to handle unbecoming business partner, that is ‘stress’ and incurs a heart attack. He ends up in Hospital, and from here, the story develops.

The Hospital becomes a breeding ground for love as Bob meets his nurse, Abishola, and falls in love with her at first sight. The next challenge for Bob is to prove his love for Abishola and put in the effort for the love quest. He has to accept the family problems of Abishola. Abishola is no rich queen; she lives in a cramped and modest Apartment with super-protective relatives- auntie Olu and uncle Tunde.

Bob also has to suffer the initial rejection from Abishola and live with only one Mission – to win Abishola’s heart. The Bob and Abishola pair is developed very skillfully throughout the series. Their love is original, unique and unconventional. To sum up, Bob Hearts Abishola is a classic Chuck Lorre HIT and a must-watch for love-seekers.

You can watch Bob Hearts Abishola Episode 14 on CBS’s official website or mobile app by the same name.

The lead male protagonist of the show, Bob, is played by Billy Gardell. His other notable works include ‘Mike & Molly’ and ‘My Name is Earl.’

The lead female protagonist of the show, Abhishola, is played by Folake Olowofoyeu. Shola Adewusi plays the role of Abhishola’s aunt Olu. She also happens to be Tunde’s wife. Tunde is Abishola’s uncle, who is played by the actor Barry Shabaka Henley.

Other lead characters include Kemi played by Gina Yashere; Dele played by Travis Wolfe Jr., Douglas played by Matt Jones, and Christina, played by Maribeth Monroe. Maribeth is popular for her works in ‘Workaholics.’

Bob Hearts Abishola is going to premiere on 3rd February 2020 in CBS. We will keep you posted with the latest developments.