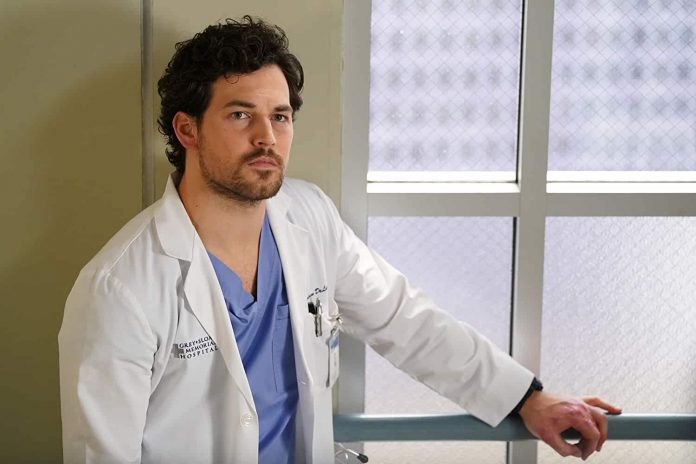 While Richard is preparing to present his PATH pen at the LA surgical Innovation Conference, his issues with Catherine don’t allow him to concentrate. On Grey’s Anatomy Season 16 Episode 19, watch Maggie and Teddy bumping into people from their past. You’re warned about the spoilers from the previous episode and the upcoming episode in this post.

Grey’s Anatomy Season 16 Episode 19 is all set to be aired on Thursday 26 March 2020. This episode is under the title ‘Love of My Life’. It is returning after a break of 7 days. It will be released on ABC at 9:00 pm (US). The expected runtime of this episode is around 60 minutes. Grey’s Anatomy Season 16 Episode 19 can be watched on ABC at the given timeslot.

If you are not subscribed to cable or If you miss the episode, you can watch it later on ABC official website, Hulu, Netflix, Vudu and iTunes. Grey’s Anatomy is a much loved show that been running for a long time now. It has a rating of 7.6/10 on IMDb, 8.8/10 on TV.com and 55% on Rotten Tomatoes. If you don’t care much about spoilers, you jump into our recap section to know what happened in the previous episode. Meanwhile, Grey’s Anatomy Season 16 Episode 19 Promo has just arrived and it looks steamy AF! We’ll leave you with its the promo, Enjoy!

READ:  Rick And Morty Season 4 Episode 6: Release Date and All We Know So Far

Grey’s Anatomy Season 16 Episode 18 ‘Give a Little Bit’ released on Thursday 19 March 2020. So, it was Meredith’s Pro Bono Surgery Day. She was looking for surgeons and asked Richard for help. Richard politely declined as he has got too many things on his mind and can’t be Meredith’s surgeon. Richard is probably very disturbed with how things turned out to be with his second wife because he never thought that his second marriage will fail too. Meanwhile, Amelia is back that too with a piece of good news this time. She told Owen and Teddy that it’s was Links baby.

Koracick was keeping a check on everything on pro bono surgery day, he was making sure that everything was in place. On the other hand, Meredith had agreed to Twenty Five surgeries in Twelve hours and DeLuca had thrown one extra. He was supposed to be operating on a girl named Cindy who he thought to have been trafficked. Bailey thought otherwise and that probably DeLuca isn’t acting straight so it’s straight away removed her from the case. Later on, it’s revealed that Cindy was, in fact, a victim of human trafficking and Opal, her aunt got her out of the hospital before it could be reported.

Grey’s Anatomy Season 16 will be coming this week with another binge-worthy episode. Grey’s Anatomy Season 16 Episode 19 titled ‘Love of My Life’ is likely to give more time screen to Richard and Catherine’s issue. Their separation has one of the major heartbreaking development this season. And we hope by the end of this Episode they will finally be ready to move on with their respective lives. However, it’s highly unlikely that get back together now.

Meanwhile, Maggie and Teddy will be seen out of the town and meeting people from their past. Maggie broke up with Jackson and there’s a chance that she might someone to cuddle with. As far as, Teddy is concerned she’s been cheating Owen with Tom and that’s the worst thing that she could do to a kind soul like Owen. This trip might make her come clean to Owen and who knows if this relationship will end up in dark dungeons of infidelity. Meanwhile, Hayes is likely to reveal more about his past since he’s already talked to Meredith about his wife there’s a slight chance that he’ll reveal more about himself.