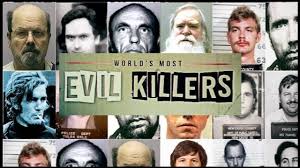 Britains one of the most famous shows World’s Most Evil Killers us all set to return for its 4th season. The show focuses on the world’s most fearsome and startling killers. After the first season of its release, it has drawn a massive fan following among the onlookers. The enthusiasts of the show like the series because of its gripping storyline and reflection on portraying the minds of some of the most wanted criminals of the UK and The World. Now after the announcement of its 4th installment, the Tv series buffs can’t wait for the forthcoming season as it will feature some of the most gruesome and heinous crimes by some of the most notorious Gangsters, Murders of all time the show offers the insight in one of the most crucial and essential attributes of a crime scene is

The new season is likely to encompass Harold Shipman, Robert Napper, Robert Ben Rhoades, Richard Chase and many more proposing the first-hand report from the detectives working on the case or working on the cases and in some cases also includes the family of those criminals and family of survivors. The Show host Fred Dinenage is all set to return for the 4th installment and in the upcoming season, you can witness the forensics, psychiatric, journalists, criminologist examine the minds of these criminals like how they execute operations? and also What happens at the back of their mind when committing such crimes, and how they eliminate the probable evidence from the scene. This series is produced and directed by Jinal Patel and internationally distributed by Keshet International.

Unfortunately, these types of TV series generally don’t come with trailers but we have a link of one of the episodes which you can refer to get an idea behind the show.

What is the cast of World’s Most Evil Killers:

As there are a total of 3 number of seasons and every season consists of a fair number of episodes so we can’t mention all the cast members of the show however we can mention quite a few of them here is the list: (Some of these following people are not actors some of them are retired police officers, FBI agents, etc)

update and Streaming Details of World’s Most Evil Killers:

As of now, there has not been any official announcement regarding this but if everything goes as outlined the show is likely to be returned in the fall of 2020. The show will be available for streaming across Sky Networks you can watch it from that site.