It looks like Ian McShane and Timothy Olyphant have returned to Old West, as we have first images of Deadwood movie of HBO. For those who remember, there was a show with the same name on TV in the mid-2000s. The show was situated back in the 1870s, and in a place which is now South Dakota.

The show had a lot of distinct characters involved, and there were professions of characters such as saloon owners, prostitutes, prospectors, outlaws, and a sheriff. Some of them were imaginary, but some were based on real examples. The show is written by Milch, and it is directed by Daniel Minahan.

Interestingly, the show ended ten years ago, and now we are going to see a film on it. The film will gather all the living characters of the original show and bring them back to Deadwood. However, there were many questions over the news as there have been occasions in the past when rumors were spreading about a show. But this time we have some first images to back argument, which are as below. 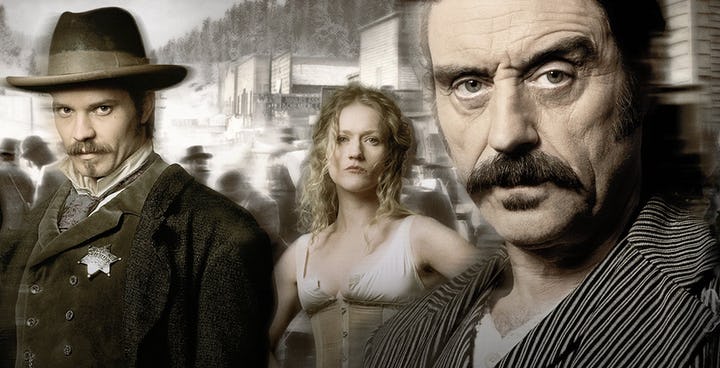 There is no officialof Deadwood provided, but it is proposed that the show will be released in 2019 (confirmed details at the end of this article). So, we are going to see the film soon, as we are about to enter 2019.

The show is finally having a confirmed which is not too far away. The film is supposed to release on 31 May 2019, on HBO to complete the story. Ian McShane recently commented that he had seen the film, and also assured that it is good enough for the wait. The cast is also confirmed, which is as below:

So, get ready to receive the ending of the show, which you might have been waiting since August 2006.