Boruto: Naruto Next Generation is the sequel to one of my favorite animes of all time. We can find many strong Shinobis in both the Naruto and Boruto series. And if we talk about Shinobis, then the first thing that comes to mind is Jutsu. In the series, we encountered a wide variety of Jutsus, but not all of them had the same impact.

Boruto tells the tale of Boruto, Naruto’s kid, as he sets off on his own journey. Mikio Ikemoto created the anime, while Uky Kodachi and Masashi Kishimoto wrote the story and manga. One of the highlights is that Boruto is not at all like Naruto; he has a completely distinct mentality and is dealing with various circumstances.

In the Boruto series, the beginning of the Jutsu exhibition was continued, and many new Jutsus also emerged, some of which are noteworthy and which are being mentioned below but are not in order as it’s really difficult to rant these accordingly. 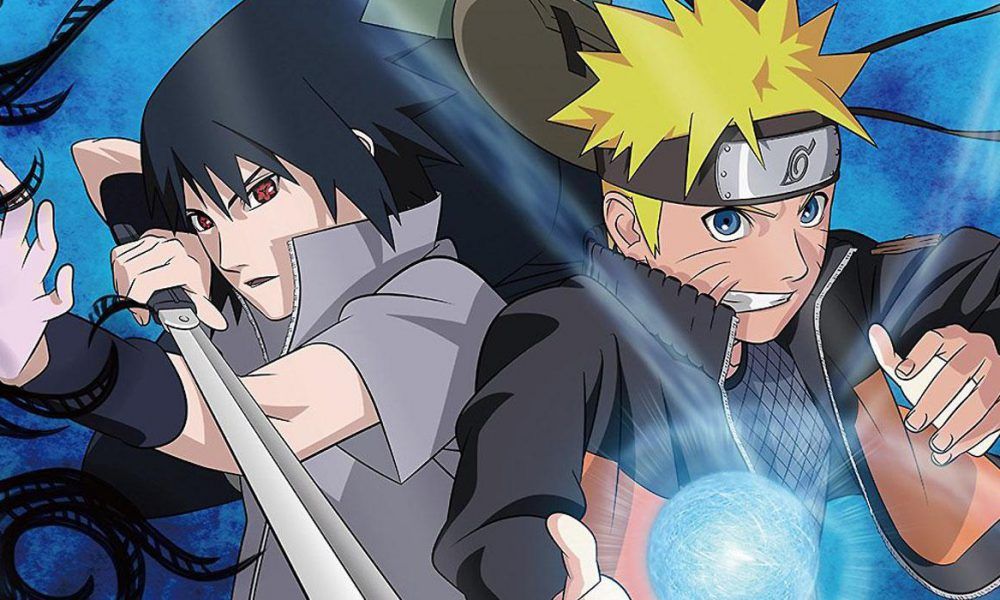 Ninjas utilize a magical skill (or method) known as a Jutsu during combat. The chakra must be used in order to use the jutsu. The ninja method involves combining and releasing the energy of two chakras. The ninja can perform the necessary technique by creating hand seals. There are a lot of different hand seal combinations, so there may be undiscovered new approaches. Purple-colored Electric light is a powerful electric attack where Kakashi focuses lightning in his hand before unleashing it on the target. Kakashi Hatake built the Chidori after failing to use his lightning nature on the Rasengan.

In his mind, the Chidori should only be used to defend close friends and family. The user must first gather lightning in their palm in order to execute; the intense concentration of electricity creates a sound that sounds like many birds singing, thus its name came into existence. There is a cap on the number of times the Chidori may be used each day because it uses a lot of chakras.

We are all familiar with Rasengan, created by Minato, and then it was passed on through Jiraya to Naruto, and therefore reached Boruto. It had so many variations made by Naruto, just like Boruto also made his own changes and the Vanishing Rasengan came into existence. While he was working on learning the Rasengan, he unintentionally added some wind chakra to it and it became invisible. It may appear weak to make a mortal wound, but it can be extremely effective when thrown on a vital point. Despite sharing his father’s appearance, Shikadai Nara is not restricted to the jutsu of the Nara clan. Additionally, he took some of his mother’s smart advice and modified it. Shikadai can control an errant wind turbine by unleashing a tremendous wind gust while using Wind Style: Dance of Turbulence. The method can quickly stir up any nearby loose particles. Additionally, it is done to start a manageable dust storm. We have all seen Temari using this jutsu in Naruto Shippudin. 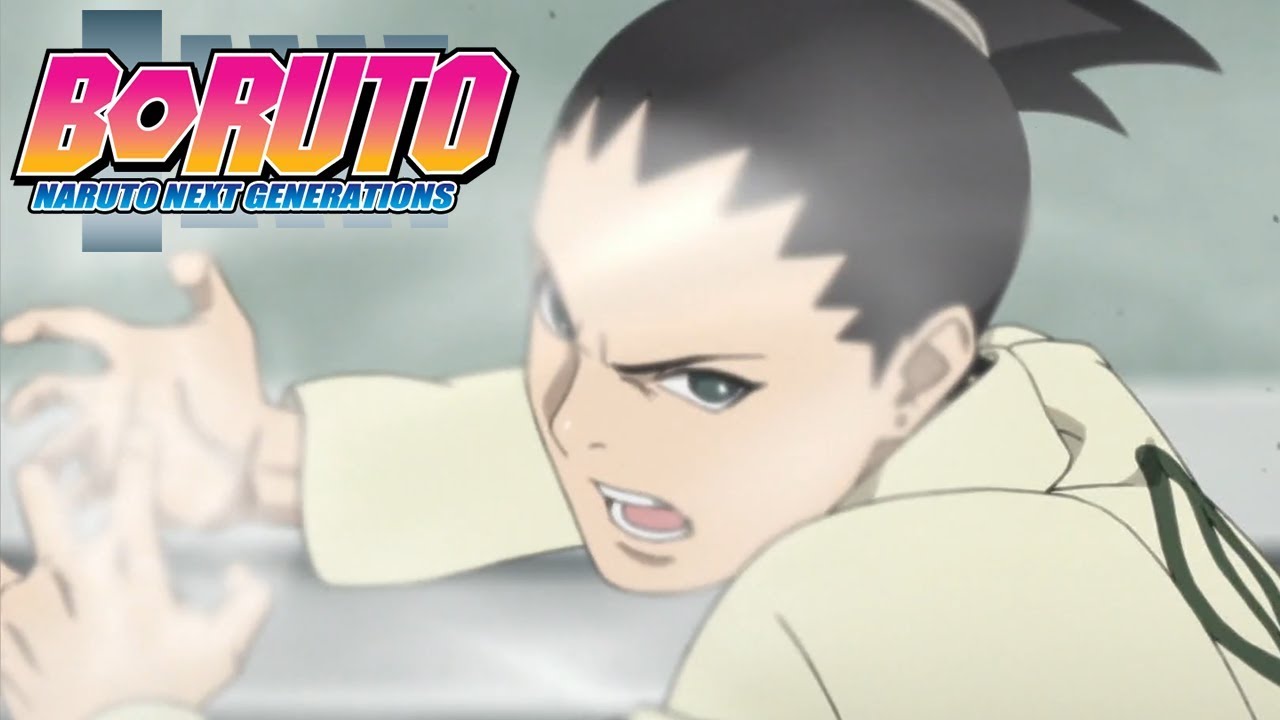 Used by- Isshiki Ōtsutsuki as Jigen

After being betrayed by Kaguya and on the edge of death, Isshiki tsutsuki used this jutsu to enter Jigen’s body, where he survived as a parasite before gaining control of his mind. Sukunahikona is a djutsu of the unidentified right eye of Isshiki Tsutsuki. He has the ability to instantly reduce the size of himself or any inanimate object in his field of vision and then instantly restore it to its normal size. It is sometimes mistaken for teleportation since the shift in size occurs too quickly for the human eye to notice. It is a unique djutsu claimed to be known by the Otsutsuki Clan. Boruto activated this Jutsu involuntarily at first, but with the passage of time he was able to have control over it. He always wanted to have Byakugan power like her mother and sister, Hinata and Himawari. Instead, he got something a bit more advanced than the Byakugan. Although it appears the same as a full blue/white eye with a barely visible pupil, it can also sense and see the invisible barriers as well as know where the Otsutsuki Clan is using its power. 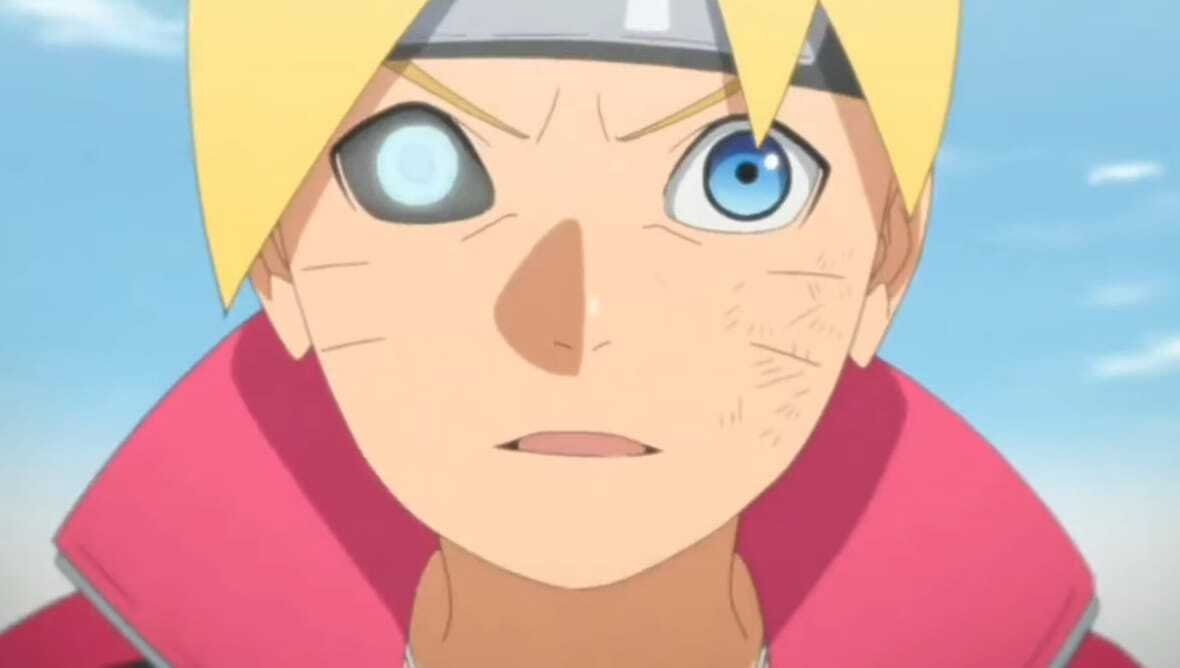 Used by- Mitsuki and Naruto Uzumaki

Sage Mode can be achieved by mixing one chakra with natural energy. This allows them to have more power and energy to open up new and improved techniques. We have seen this jutsu in Naruto many times done by Jiraya and Naruto. It can be achieved at two places; those are the Toad Mount and Snake Cave. The user’s Ninjutsu, Genjutsu, and Taijutsu become more impactful with the Sage mode. 9. Palace of the Dragon King Jutsu

This jutsu is used by Urashiki Otsutsuki, which allows him to petrify someone for ten thousand years without dying and ageing. It comes as a black-ahped box which exposes the gas lead to pertrification. It’s inspired by the tale of Urasika Taro, thus having its name after the palace in the tale mentioned above. This technique is inspired by The Journey to the West character Hóng Hái-ér, developing inextinguishable fire. It can be activated by making physical contact with the person using a kunai or other object. This lit the fire, which can’t be extinguished by wind or water release and burns the opponent in just mere minutes. But it can be sealed away or absorbed before touching the opponent. Nature- Ninjutsu and Wood Release used as a medium

This jutsu allows the individual to absorb the chakra of someone and can be used as their own. The opponent will be left with less energy to fight or combat, and if more chakra is being taken, the person won’t be able to move. But if the user doesn’t know and has trained for that Senjutsu chakra they have absorbed, they will turn into stone. There could be a requirement for a medium, or it can also be done by simply touching the target. Momoshiki uses his Rinnegan in his right hand to transform people into Chakra pills, which allows him to either intake or absorb their Chakras. An advanced form of the Sharingan possessed by the Uchiha clan. But only some of Uchiha’s had activated this. These eyes can seek the truth of any creation and its origin. Its appearance resembles pinwheels. Mangekyo mostly gets awakened when facing the death of someone close to the user. Its ability differs from eye to eye and person to person. Shin uses this by marking the items with special seals, which allow him to manipulate them. Being a member of Kara, Delta can do body modification, which also allows her to possess this ability to throw beans through her eyes. Thus, beans can overcome any barrier or regeneration abilities. This bean also lets her absorb the opponent’s chakra and can be used by her as her own. It can be very destructive if being used in large amounts by releasing more energy and chakra. 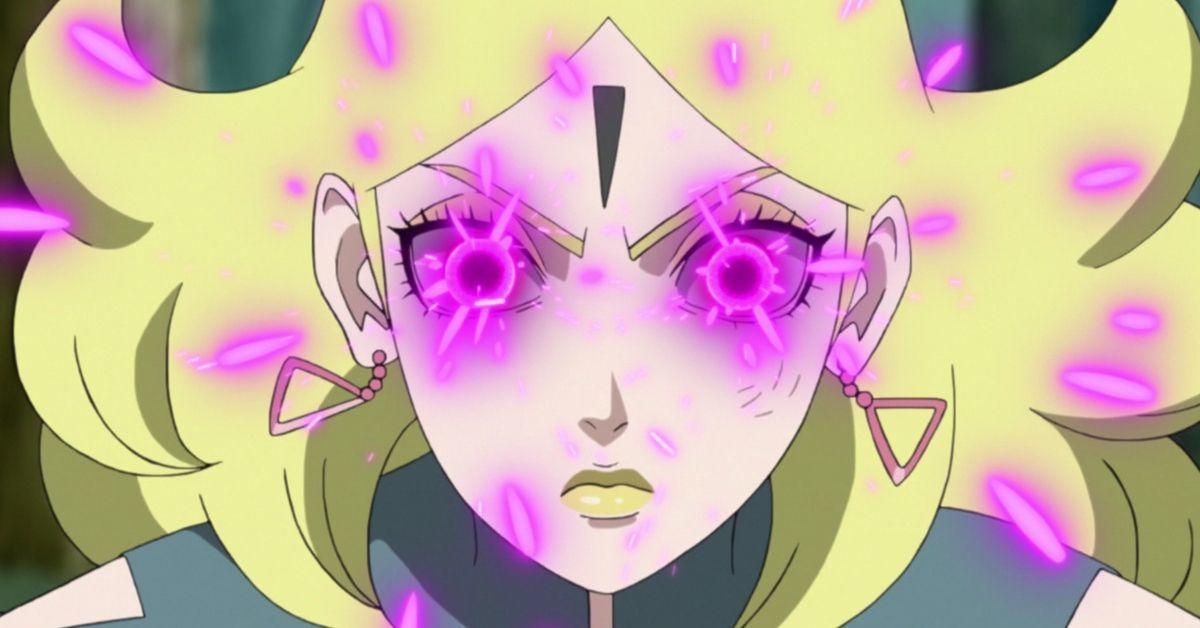 It is a summoning jutsu like we have seen in Naruto. Nue is a yokai created from Hashirama Cells that we can see through its roots. It was passed on to Sumire by her father to destroy the Leaf Village (Konoha). At first she was afraid of Nue, but then Sumire secured a stronger bond with him and started to nurture him. And even Nue becomes loyal to her despite being made with negative energy. 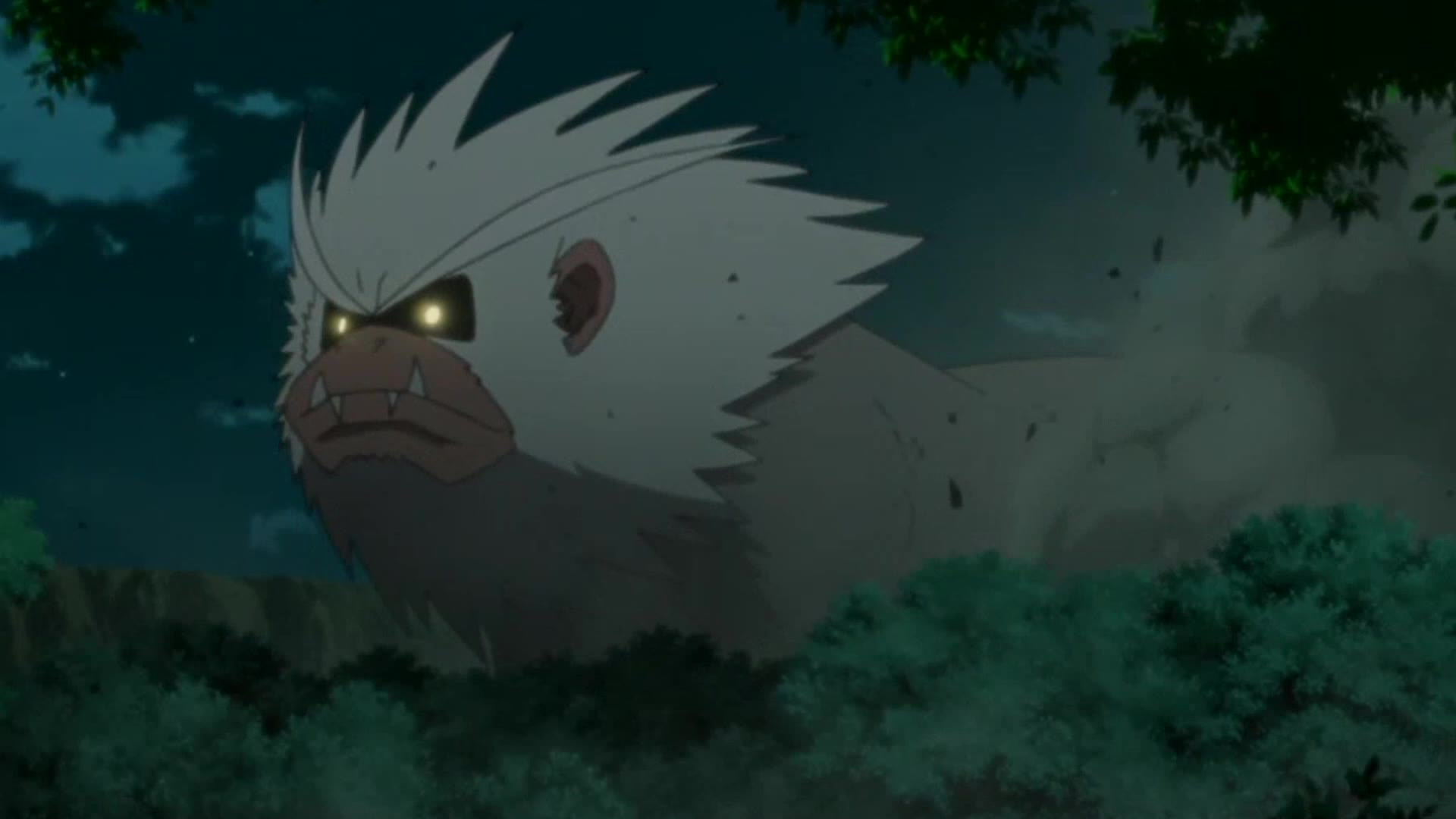 Urashiki uses this Jutsu by producing a fishing rod like thing induced by his Chakra. This rod allows him to take out the opponent’s chakra and its ability. He stores the taken chakra in his gourd and is thus able to use others’ abilities present in their chakras. For example, by taking Shikamaru’s chakra, he can do shadow related jutsus. 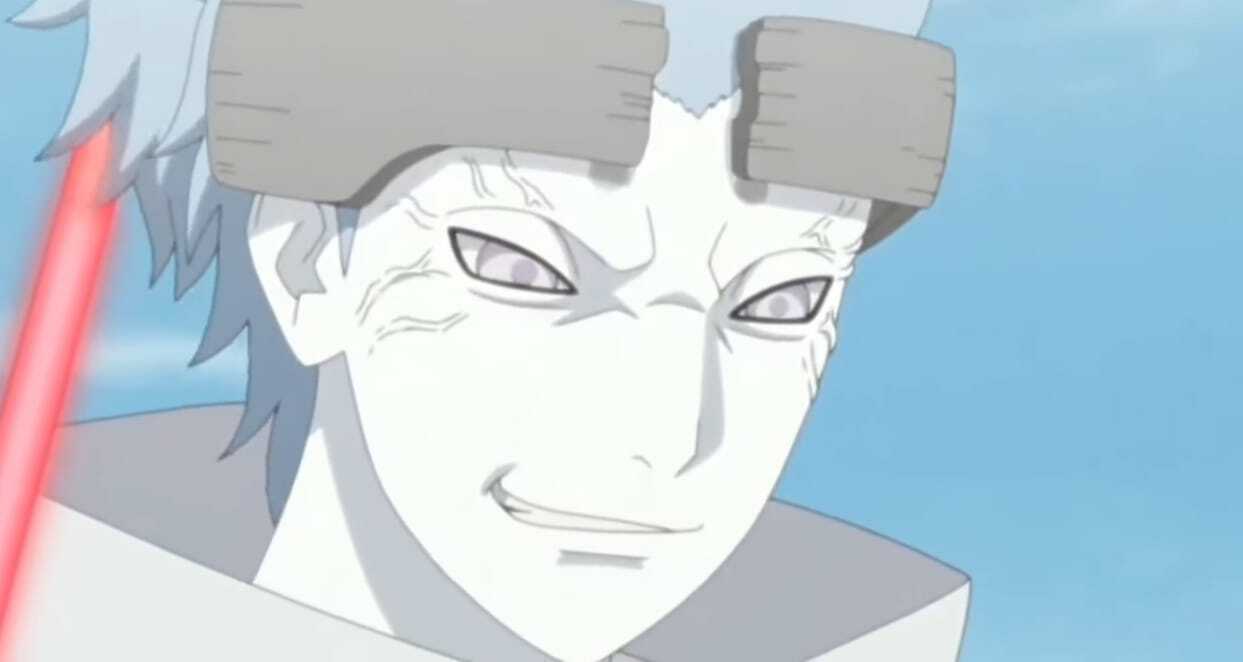 Used by- Boro and Tsuzumi

This allows the user to produce a dark mist around him, which if inhaled or touched, could make the person paralysed by taking out all its power. And as it’s not being produced by Chakra, no one can absorb it, which makes it more deadly. Boro uses this Jutsu in Boruto, so he had resistance to this virus. It can also be mixed with gunpowder in order to blast any area.

It allows the user to trap the opponent in a large black sphere made by pulling everything around. It appears that making a satellite/sphere demands a lot of chakra, as Nagato discovered when he tried to use his Six Paths of Pain. He had to first get the Deva Path near to him in order to channel his chakra to it more efficiently, even though he was quite weary. Targets are most frequently restrained using Chibaku Tensei, which draws them in during the formation of the satellite and traps them beneath the piles of debris. The greatest technique to combat Chibaku Tensei is to smash the black sphere as soon as it forms because it is so hard to escape from it.