East Into The Night Chapter 6 Raw Scans and Spoilers

East Into The Night Chapter 6

In this post, we are going to talk about East Into The Night Chapter 5 Raw Scans, and spoilers.  Chapter 5 of the Manga was released earlier today, adding to its Bi-Monthlyas the Manga made its debut a few months ago. We will be focusing on theschedule for the upcoming chapters and where you can read them as soon as they are released. Later on, we will look at the potential Spoilers for the upcoming chapters and their Raw Scan updates.

East Into The Night Manga Summary

This Manga delves into the depths of the Sci-Fi world where eternal darkness exists, which people called “night.”  There exists a legend that long long ago, there was an opposite to this darkness, which was far brighter than their lamps. They called it the light of hope for humanity. Now people live in search of what could have happened as they want to bring back the forgotten light.

East Into The Night Chapter 6 Spoilers 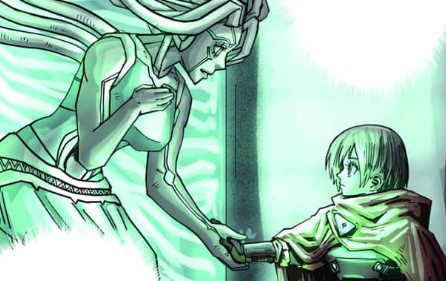 Tiyo is forced to open the door to the ruins as Yohg threatens to kill a kid he kidnapped if she doesn’t cooperate. As she went to open the door, a voice in her head asked her what she wanted assistance with as she wanted the restoration of the surrounding environment. She also wanted to know how to find the “Morning” and where to find it. Although she was not given the answer she was expecting, the voice told her that if she could awaken others like it, she will have a better chance of finding the “Morning.” It looks like she didn’t issue a command to open the door to which Anag understood it as a failure. They were then attacked by the Cavalry as they came looking for the Kid that Anag had kidnaped.

East Into The Night Chapter 6 update

This Manga releases new Chapters once every two weeks, and the latest Chapter was released on the 25th of December 2019. Shueisha’s Manga Plus also announced on its official website that the next release, Chapter 6, will be released on the 8th of January 2020.