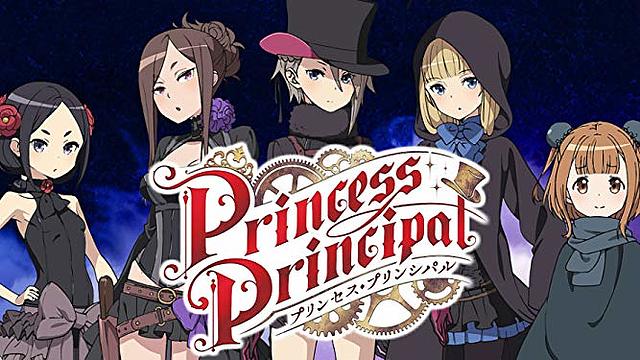 The best yuri anime series from 2017, called Princess Principal Crown is soon airing its first movie. The movie will continue the series from the anime series with 6 episodes. This series may have a gain little significant critic, Princess Principal was picked out by Kotaku as one of the best summer anime series of 2017. The Opening song to the series, “The Other Side of the Wall” named as the best theme song of 2017 in Anime News Network. The song was also nominated for the best opening song in 2017 in Crunchyroll Anime Awards.

If you are into suspense and drama genre this anime might suit your taste.

Princess Principal is a fictional world and set in an Albion of England in the Early 20th Century. The Kingdom of Albion has a mysterious substance called Cavorite which is used to construct heavily armed airships. With the help of the Cavorite Alvion became the dominant power of the world.

The citizens of Albion grew angry at their country’s ruling class for which is ignoring their difficult situations. Soon they start the London Revolution in which lower came together to overthrow the royal family. Soon because of the revolution the great wall was made which splits Albion into two nations The Commonwealth and the Kingdom.

The commonwealth launches “Operation Changeling”, to replace the Kingdom Princess Charlotte with a girl name Ange who has the same resemblance to her, to put an agent within a royal family.

You can check the latest here:

The main protagonist of Princess Principal and the true princess of Albion. her birth name is Charlotte but known as Ange in the series. Ange is voiced by Aoi Koga for Japanese and Avery Smithhar for English.

Ange is known to be a kind girl and quite often said by a princess who Ange taught how to read, write, and also how to play the piano. because of the influence of her work and goals, she is quite good at both lying and detecting lies and often seen as teasing others by manipulating their truths.

She has a stolen prototype Cavorite technology, that allows her to manipulate her gravity and the things she touches.

Ange was born somewhere in the 19th century in London. She was tired of the daily life of the princess and of the things she should learn as a princess. So she decided to leave the palace and met a simple girl who looked the same as her. They became quick friends and started switching places. One day because of the sudden revolution both girls were trapped in her opposite roles.

One of the protagonists in Princess Principal and the real Ange because of the revolution she is currently stuck in the princess role and known as Princess. Princess Charlotte is voiced by Akira Sekine for Japanese and Patricia Duran for English.

Ange was known to be a poor little pick more pocket who was trying her hardest to survive. Around that time before the revolution, she met Princess Charlotte who she started to spent time with. They sometimes switch their roles and even though she didn’t want to be the princess she had to lead a royal life in Princess Charlotte place.

After joining Ange’s Spy team and her status as a princess helped her access and influence anything to accomplish their mission.

Dorothy has a cheerful and positive personality and loves drinking wines and booze. She often lures guards with her woman charm to distract them and help their comrades continue the mission. Her actual age is 20 but said to be at 17 because of the requirement to be a spy. Dorothy is voiced by You Taichi for Japanese and  Elizabeth Bunch for English.

Beatrice is 15-years-old very kind and a little introverted girl. She has a trust issue which is why she finds it difficult to accept new people. She sometimes is seen as a brave member of the team due to her expertise with the machine and the ability to change her voice with the help of a machine in her throat. Beatrice is voiced by Akari Kageyama for Japanese and Shanae’a Moore for English. And her Imitation voice was done by Fukushi Ochiai, Motomu Kiyokawa, Tesshō Genda, Kōsei Hirota, Hiroya Ishimaru.

Beatrice was once a test subject for her father’s experiment and the machine which gives her the ability to change voice was originally implanted by her father. Though her mechanical throat is quite useful in spy missions which she hates it.

Chise is a 16-year-old exchange student from Japan. She is quite good at samurai-style swordsmanship and said to be the strongest of the spies in the ranks of melee combat. She is a spy for Japan who is tasked to observe the Commonwealth and Kingdom determine which country to ally with. Chise is voiced by  for Japanese Nozomi Furuki and Rachael Messer for English.

She was trained by her father, Todo Jubei but he later betrayed the Lord Horikawa and turned back at him. She later kills him.

Princess Principal is a Japanese television anime produced by two studios, Studio 3Hz and Actas. The director is Masaki Tachibana and scripts were written by Ichiro Okuochi. The Original Character was designed by Kouhaku Kuroboshi and Yukie Akiya. The 6th part film was supposed to release on April 10, 2020, but has been postponed due to the covid-19 pandemic.