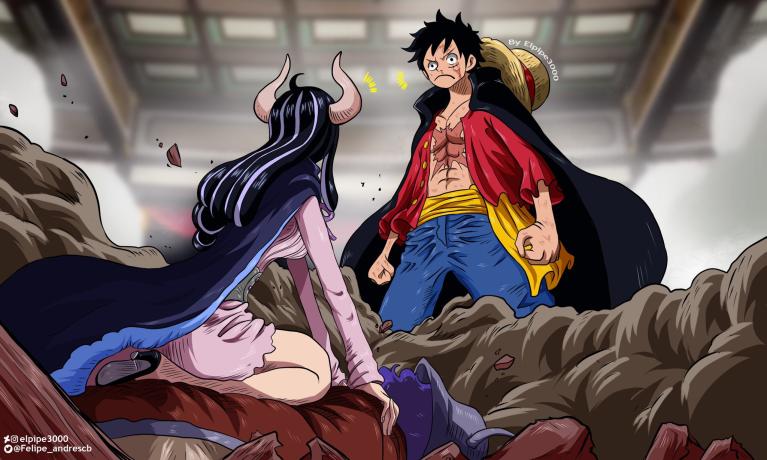 We have got the most shocking spoilers up until now! One Piece 983 Spoilers are here and it reveals Kaidou’s son Yamato and how he saves Luffy, and there is a lot more. Without any delay, let us get to it!

The cover story of the chapter is about Lola and Chiffon meeting their father Pound. Moving on, we see the eldest son of Big Mom, Perospero, and he is approaching Onigashima alone using his candy ability, and he totally does not approve of the alliance between Big Mom and Kaido.

The next part in One Piece 983 Spoilers features Prometheus chasing down Nami, and Zeus is really worried if he is going to die if Big Mom sees him, likely we will see Zeus backing up Nami to fight Prometheus. Roronoa Zoro and Eustass Kidd are fighting gifters, now comes the part you guys have been waiting for. Luffy and Ulti are fighting each other, technically headbutting each other.

We were all expecting Zoro or Luffy to find Yamato, but it went quite the opposite of that, Yamato ended up finding Luffy, and to the shock, Yamato is wearing ONI MASK and attacks Ulti making her fall with the weak beast pirates members, and getting confused. While that Yamato picks up Luffy and escapes from the Beasts Pirates.

Yamato refers to himself as “BOKU”. Yamato talks to Luffy and tells him that, “you are Straw Hat Luffy right? I have been waiting for you all this time. My name is Yamato, and I’m Kaido’s son.” Yamato’s appearance is said to be slim, and Yamato posses very long arms, roughly as big as Luffy’s height.

We also see a scene in One Piece chapter 983, where Kozuki Momonosuke is tied to the cross. These are not full spoilers, when we have more spoilers, we are going to be sharing those with you so stay tuned.

You can read One Piece 983 online in the English translation version on MangaPlus and Viz Media. One Piece Chapter 983 will be released on 21 June 2020.

One Piece Chapter 984 will be released on Sunday, 05 July 2020. The chapter is getting delayed as the Manga will be going on a break next week. So for this weekend, One Piece chapter 982 will be released and then we will have a little while to wait as new chapters are usually released every Sunday.