Naane Varuvean, translated as “I will come myself,” is a Tamil language psychological horror thriller film released on 29 September 2022. The film is written by Dhanush and directed by Selvaraghavan. The writer appears in the movie in a dual role after the films Kodo and Pattas. It would be the second time after Mayakkam Enna that Selvaraghavan and Dhanush are working together on a film.

The development of the film started last year with Kalaipuli S. Thanu announcing a project with Dhanush with the temporary title D44. On 14 January 2021, the title was finalized to be Naane Varuven. The film was produced under the banner of V Creations, and it is Selvaraghavan and Dhanush’s 5th collaboration.

The Plot of Movie

The story revolves around the identical twins Prabhu and Kathir. Prabhu is the innocent one, and Kathir is the troublemaker. After beating up the neighbor’s kid, Kathir was tied up to a tree in the backyard by his father. That night, Kathir goes missing as he is kidnapped by a psychotic serial killer. Kathir returns to his home after killing him and continues his violent behavior. He even stabs his father multiple times, killing him after locking his twin Prabhu in a wooden box.

Instead of reporting to the cops, Kathir and Prabhu’s mother seeks help from a local saint. The saint advised her to separate the two brothers for them to survive. The mother ran away with Prabhu leaving Kathir behind in a temple.

Prabhu later marries Bhuvana and has a daughter Sathya. His daughter was schizophrenic, which concerned Prabhu’s family. Sathya would talk to an imaginary person and often lose her sleep. After discovering her talking to someone at midnight, Prabhu installs a baby monitor in her room to record her.  Prabhu found the monitor broken and thrown outside. His daughter claimed that the unknown person asked her to destroy the baby monitor otherwise, he would kill Prabhu.

Startled by the incident, Prabhu takes her to a psychiatrist, where she reveals the identity of the unknown. She introduced him as Sonu, a little boy who often talks to her. After getting no help from the psychiatrist, Prabhu seeks the help of ghostbusters he found on Youtube. They started monitoring her daily activities. One night, Sathya started talking in Marathi, and the crew translated it for Prabhu. She, possessed by Sonu’s voice, says that Prabhu has to meet Kathir and end his wrongdoings which caused Sonu’s death.

Kathir, on the other side, after being abandoned by his mother, and Prabhu was insulted and abused by people around him. He killed all of them because of his uncontrollable thirst to kill. He married Madhuri, a deaf and mute woman, and settled in a small cabin in the woods. They had twins Sonu and Manu, with Sonu being the eldest.

When his youngest discovers his father’s real self, he discloses it to his mother and brother. Madhuri wishes to abandon him with their sons but is stopped by Kathir. He locks them up in a room. Madhuri tries to escape Kathir but is stopped by him. Kathir kills her and their eldest Sonu, in a heated argument.

Prabhu, along with his daughter Sathya and psychiatrist, Guna travels to Chopda, a town in Maharashtra. Possessed by Sonu, Sathya continued talking in Marathi. Her mental health also starts deteriorating. A scared Prabhu takes her to Sonu’s school, where she communicates with Manu while being possessed by Sonu. She and Prabhu assured him of his safety against Kathir. Manu tells them about his father’s killings and his life in the forest.

After meeting with his twin, Prabhu asked him to leave Manu. Disagreeing with Prabhu’s suggestion Kathir got into a fight with him where he nearly killed Prabhu.

Using her archery skills while possessed by Sonu, Sathya tries to stop Kathir from killing her father.  Kathir and Manu fall from a cliff to death, but Prabhu returns alive. After being asked by Manu to check Kathir’s presence through twin telepathy, they discover that Kathir is also alive. The film ends there, hinting at a second part.

‘Naane Varuven’ is a nail-biting horror-thriller starring the south superstar Dhanush.  The film keeps you hooked up in the first half, thanks to Sathya (Hiya Davey). Hiya’s acting skills in the first half keep up the excitement. The first half is unpredictable and full of surprises, while it becomes slow and predictable in the second.

The film starts to lose intensity in the second half as the story moves further with Kathir’s re-entry.  The story slowly moves from horror-thriller to action. In the latter half, Prabhu and Kathir’s fight doesn’t let us forget the typical south Indian action.

Selvaraghavan did an excellent job of showcasing the film’s paranormal part to the audience. The south industry is slowly advancing from horror comedy to horror thriller thanks to Selvaraghavan’s choice of films. His films are full of surprises and spine-chilling moments which never disappoint the viewers.  If the movie has Selvaraghavan credited, then it is worth watching. However, ‘Naane Varuven’ may disappoint some of Selvaraghavan’s fans because of its tedious second half.  It wasn’t intense as the first because the story became much more predictable. If the second half had created an impact like the first, ‘Naane Varuven’ would have received much more positive reviews. 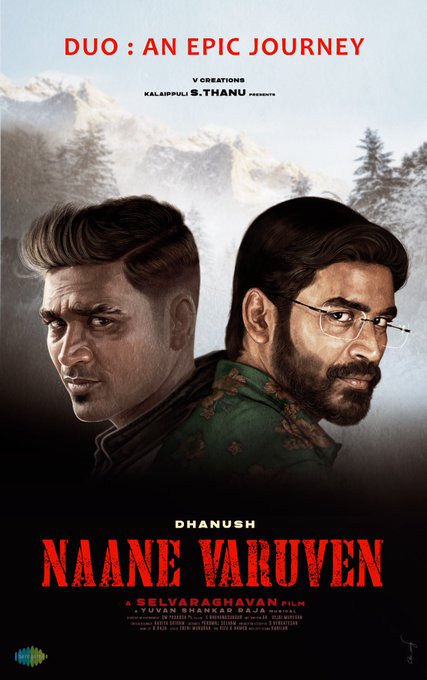 Dhanush has done a marvelous job portraying two characters in the film. He has done such an outstanding job that it is hard to believe that the role of Prabhu and Kathir is played by the same actor. Dhanush makes sure that everything from their appearance to their speech is different. However,  the role of Prabhu suits Dhanush the most.

Dhanush and Selvaraghavan’s ‘Naane Varuven’ clashed the weekend with Mani Ratnam’s epic period action drama ‘Ponniyin Selvan: Part 1’ ( released on September 30). ‘Naane Varuven’ released on 29 September, had only one day to conquer the box office. One of the reasons for its low performance at the box office is its poor promotion. Dhanush nor Selvaraghavan, were neither seen promoting the film. They wanted to keep the movie a mystery and wanted people to experience the thriller on the big screen.

On a scale of 10, it must be rated 8. Overall it is worth watching, the only drawback is its second half. Only if the second half was interesting as the first, the movie could have surpassed the attention that Ponniyin Selvan: Part 1 is receiving. Naane Varuven collected around 7.30 crore rupees on its first day of release.