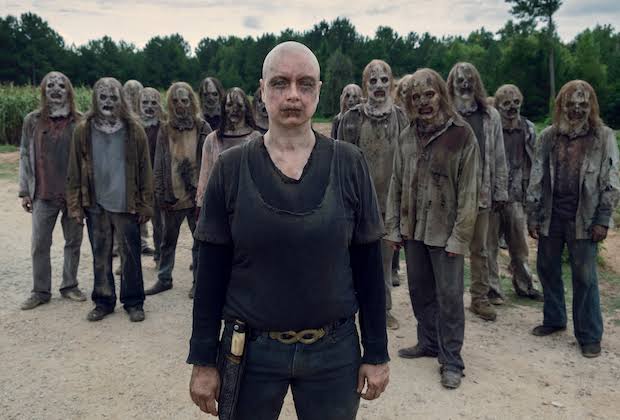 In this post, we are going to talk about The Walking Dead season 9 episode 12 where to watch, and spoilers. But before that, it is required to take a quick recap of the previous episode. It was a very dreadful sight to see Alpha insisting to return Lydia. But as we are already aware that Hilltop is not going to show any mercy or goodwill gesture at all. They stuck to their decision, as they did not want to return Lydia at all. But then the tables turned when they heard a child crying.

Soon, Alpha offered Alden and Luke as trade baits to make their argument stronger, but a herd of walkers was advancing towards them. The Whisperers tried to stop the walkers but they failed as the baby would not stop crying. Then the mother left the child to sacrifice, but Connie came out of nowhere and grabbed the infant and rushed into a sea of cornstalks. Daryl and crew helped Connie to survive against those walkers. So, let’s talk more about the upcoming episode ahead!

The show can also be watched online on the AMC app, where viewers have to enter their TV subscription details to log in. Additionally, there are many other online options such as Hulu, Roku, Sling, DirecTV Now where viewers can stream the AMC channel at the mentioned time to watch The Walking Dead. The following paragraph will contain spoilers from the next episode.

The upcoming episode will feature too many problems for the characters. The synopsis itself suggests that one community is supposed to suffer from internal voids which might provoke division within the group, and there is no mentioning of the group. On the other side, another group’s true nature is supposed to come out, which will be more focused in the next episode. Also, the group will have to rescue a friend but they will have to face problems in that too! Take a look at the trailer of the upcoming episode!