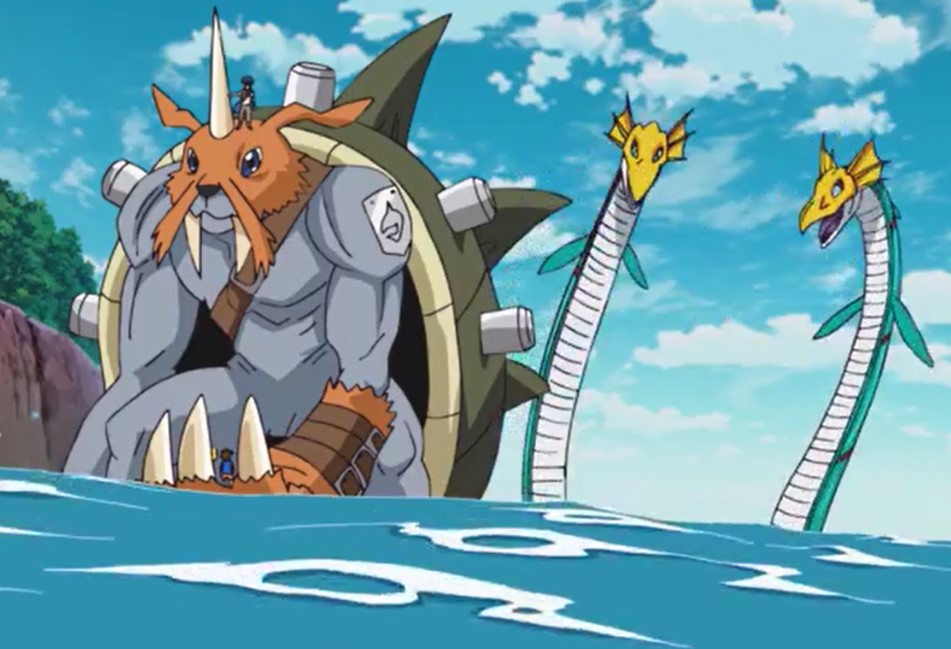 The Digital World is the mysterious world where the Digimon live. Taichi Yagami and the chosen ones with their partner Digimon head to a new stage in their adventure. Meanwhile, in the real world, large vessels everywhere fell into an uncontrollable state. The world was facing a major crisis and Koshiro found the counterplan. After worn out from their last battle the Digimon and enjoying eating fruit to boost their energy. Taichi has noticed that Cloud Continent has become small after their battle.

Leomon reveals that even Peckmon can’t reach it. If they can no longer return to Cloud Continent they have to move forward. Takeru is wondering what kind of Digimon exists in Cloud Continent. After being saved from evil Digimon Eldoradimon sail somewhere to the sea. While they are still talking Ebidramon shows up swimming from the seas diving like a dolphin. Seadramon also follows and started fighting with Ebidramon in front of Taichi’s crew. Seadramon freezes Ebidramon and started chewing him and he then evolves into a powerful Digimon.

Digimon Adventure Episode 27 will be released on Sunday, 6 December 2020, at 9:00 AM JST. This Anime releases its new episode every Sunday. This post may contain spoilers of the upcoming episode, so make sure to be careful when you continue. You can also check this Anime on its official websites on Crunchyroll. Allow me to take you to some of the development of this Anime below.

Waruseadramon emerges from Seadramon and Ebidramon’s powers.  Taichi yells that a Digimon ate another Digimon and evolved. Waruseadramon charges at Takeru and Pantamon with an aim of eating them. Agumon evolves into Greymon and Gabumon into Garurumon. The two started attacking Wareseadramon and Falcamon joins the battle. Leomon unleashes Jyuoken that lands on Wareseadramon and sinks inside the seas after the explosion. Wareseadramon recovers from the attack and decided to retreat.

He went and call some back up since he was one against all. Megaseadramon shows up as a backup and clashes with Greymon. Patamon warns everyone to be careful since they are facing the ultimate Digimon. Tachi asks Yamato to send Patamon and Takeru to safety and he agrees. While they are escaping Wareseadramon blocks their path both sides got involved in a fierce battle. The two enemy Digimons were overpowering them and Grewmon spears Wareseadramon inside the water to reduce the advantage of being defeated.

The crew noticed that Grewmon and Taichi have fallen inside their enemies’ territory which they have an advantage and they tried to rescue them attacking from the sky. After a long battle, the enemy Digimon got exhausted and started to receive heavy blows. Zudomon shows up and uses his hummer spark to beat the enemies into pulp. Other heroes have shown up and finish the enemy Digimon with multiple attacks. Taichi is surprised how they come to the Digital World.

You can also visit the Anime’s official website on www.toei-anim.co.jp and watch it on Crunchyroll. That’s the latest preview and updates about Digimon Adventure Episode 27. For the next episode updates, we will be bringing them next week as soon as the new episode is released.